Chromebooks started showing up a few years ago, but they were never more than a very niche product. They really started taking off about a year and a half ago with the ARM-based Samsung Chromebook, which stayed as #1 bestseller in Amazon’s computer category for a whole year. Part of what made that Chromebook so successful was that it had a very appealing price of $250, for some pretty decent hardware.

That’s why it was disappointing to see that Samsung didn’t make another ARM Chromebook this year with an upgraded quad-core processor, a better IPS displays and a larger battery. Instead, Google left it to HP to come up with a new ARM Chromebook, that wasn’t really new in terms of internals, since the HP Chromebook 11 actually used exactly the same internals as the Samsung Chromebook, except for an IPS display and a better designed and multi-colored package.

HP decided to make it charge through USB, which isn’t a terrible idea by itself, especially since it has a battery that is only as large as a Nexus 7 battery, so nothing too radical in terms of charging requirements there, but I suppose HP wanted it to charge much faster, so it introduced a 2A charger (about twice as fast as normal USB chargers), which caused a lot of overheating issues, and HP had to recall many of these Chromebooks. 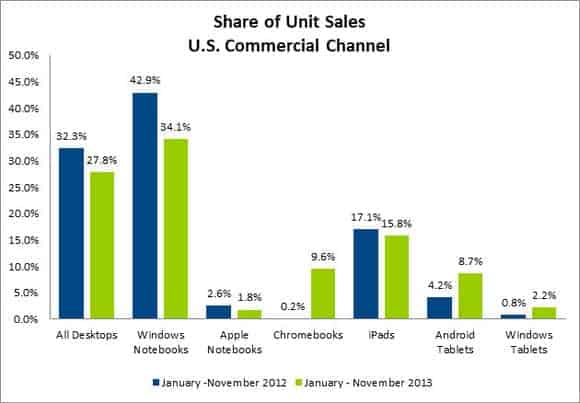 Despite all of these issues, and despite Samsung not wanting to come out with a new model this year (maybe next year?), Chromebooks seem to have done very well, especially in the educational and business markets, where Chromebooks captured 20 percent market share. Now, Microsoft’s anti-Chromebook commercials that seemed to appear out of the blue, suddenly make sense.

Microsoft is attacked not just by Android, which dominates the mobile side, which is a very dangerous trend for Microsoft by itself, if such mobile devices replace Windows machines for casual use, but also by ChromeOS in the business sector, where Microsoft thought they had their bases covered and aren’t in any immediate danger. But as Windows XP is quickly approaching its end of life, and businesses want to move off it, they’re suddenly thinking they shouldn’t be tied only to Windows in the future, when they can pick from Android, ChromeOS, iOS, Linux, and so on.