Canonical has just released a method for dual-booting Ubuntu Touch and Android on your phone. You’ll be able to flash Ubuntu Touch on the phone, but you’ll need to use Ubuntu on your desktop PC, and you’ll need to be able to use command lines. For this reason, Canonical recommends only people who are developers to try and do this, otherwise they might wreck something.

Canonical claims to have made dual-booting very simple, without needing to reboot your phone. There’s an app on each OS that makes it easy to switch to the other with a tap of a button. 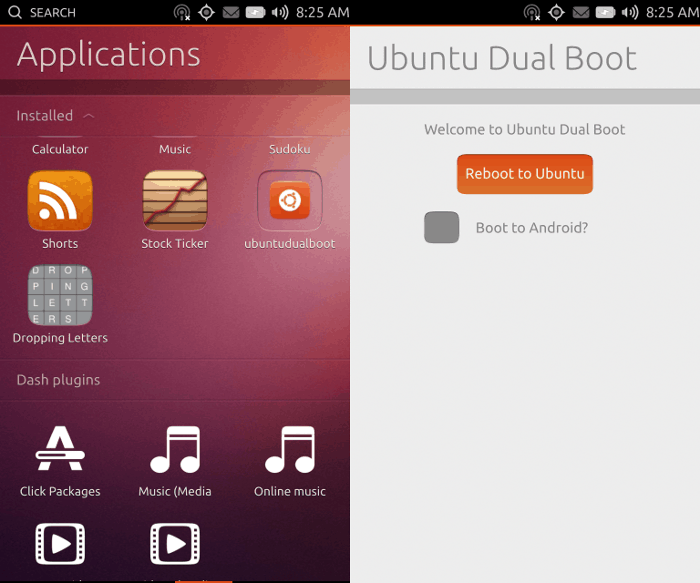 This ought to be exciting not just to Ubuntu fans out there, who can now have a relatively easy way to use Ubuntu on their Android phones, and it should get easier once Ubuntu optimizes the process. It should also be exciting to Android users who want to try out another open source OS in general, or Ubuntu, specifically.  Ubuntu has yet to come out on its own devices so far, but owning a Nexus device is the best next thing, since Canonical tends to support Ubuntu Touch on them, and it’s basically just like buying those devices with Ubuntu on them (once you get past the installation process).

I’d say Ubuntu Touch is the most interesting and prettiest “other mobile operating system” to have come out in recent times, but obviously that doesn’t guarantee its success. Canonical is going to have to work out some good deals with OEMs if it really wants Ubuntu to become popular on mobile devices.

Mozilla has managed to get some of those deals with ZTE and some carriers in some countries, which was a pretty good start for them. Same with Jolla, which has just started selling its own device with Sailfish OS, although that’s a bit of cheating since Jolla is both a hardware maker and an OS maker. That could however be a good idea for Canonical, too. If a start-up like Jolla can make its own phone and sell it throughout Europe, surely a company like Canonical could do that, too?

They only needed 32 million when they started their IndieGoGo campaign this year, and that seems like a very achievable sum of money by Canonical, a sum that should also be recoverable once they start selling the device. Plus, it would give Canonical the opportunity to create the phone they think presents Ubuntu Touch in the best manner.