New leaks point to some benchmarks of a Huawei Honor 3C that managed to reach a pretty impressive score for its $160 price range (the 2GB version being benchmarked). The AnTuTu score below shows that its performance is somewhere between Nexus 4 and Galaxy S3. I don’t think benchmarks are as reliable as they used to be in determining how fast a phone actually is compared to another, and I’m very skeptical about it being faster than a Nexus 4. There are some factors that need to be considered, though, which could explain why it has gotten such high scores in benchmarks. 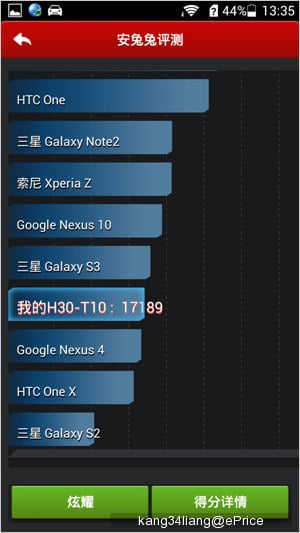 First off, the brand new low-end smartphones, even if they don’t have chips that are supposed to be faster than the higher-end ones from last year, can still do well in benchmarks and in overall performance in the real world, too, if everything else about the hardware system has been improved, too. So the processor itself may not be faster, but it could have faster RAM, faster storage, and so on, making the phone not just score high in benchmarks, but also feel faster. It’s basically the same reason why many reviewers were surprised about how fast the Moto G feels compared even to higher-end devices from last year.

Second, these phones could have more optimized software, too, especially if they come out with KitKat, but I’m also referring to having better drivers or file systems (like Moto X and Moto G). Faster software can also lead to higher overall performance, and also higher benchmarks, depending on what the benchmarks are measuring.

The Honor 3C specs are actually not too different from a Moto G. You get a quad-core 1.3 Ghz Cortex A7 CPU, a weaker Mali 400 GPU, but you also get 2GB of RAM for the $160 version (1GB for the $130 version), a 720p 5″ display, 8GB of internal storage, microSD support, dual-SIM capability, an 8MP f/2.0 Sony camera, and a 2,300 mAh battery. The specs don’t look too bad at all for the price, which would explain why 1.5 million people have already pre-ordered. You can check out the full benchmark gallery below: