Asus has been launching hybrid notebooks with Android for almost 3 years now, and they’ve been quite great at the time. If anything, it’s the software and Android’s less than ideal UX for tablets (which I think is still a problem), that have kept those devices from flying off the shelves. The fact that Google pretty much told developers not to develop apps optimized for large screen devices because that issue would take care of itself, didn’t help Asus’ sales either.

Now that Android tablets are a little more popular, and because Windows isn’t actually a very popular option in tablets right now, Asus seems to be moving back to Android for its hybrids, after being a little absent in this space with Android (unless you count their insane Transformer Trio, which it was obvious from day one it wouldn’t succeed, because nobody really wants such a device in practice for close to $2,000, when they could buy a $300 Android tablet or a $400 Android hybrid).

Asus’ new device, the Transformer Book T100TC will come with Android, according to a new leak: 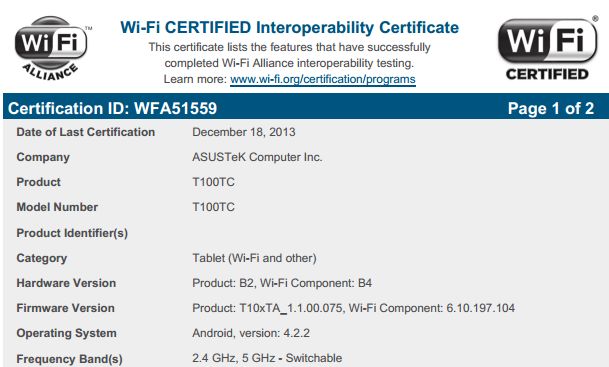 I’m hoping that Android 4.2.2 version is actually outdated information, because it would be crazy of Asus to release such a device in 2014 without KitKat. Whatever peak excitement level this device could have, it would be cut in half if it comes out with Android 4.2.2, a more than a year old version of Android.

That being said, I expect the price of this device to be its main selling point. Asus may try to sell it for $300 with the keyboard, or perhaps even less than that ($250 would be the “killer” price-point). Regardless of how well such a device would do in Western markets, I think it would work very well in Asia and in Africa, where computing is basically starting from scratch there, and they need their devices to be as cheap as possible, while performing very well (another reason for why it should come with KitKat from day one).

Assuming it will have a chip like Tegra 4, a 1280×800 resolution (1920×1200 would be great, but I’m not sure they can pull it off at the price they’re going for), 2 GB of RAM, and 16 GB of storage, it would basically be more or less a Chromebook, but with Android instead of ChromeOS, and also a touchscreen. But I don’t see why it wouldn’t be possible to offer all of that for $250 with an HD screen, or $300 with a Full HD screen, depending which way they go.