If you asked anyone in 2012 about Android game consoles and where they’d be within a year, most people would probably say that they wouldn’t be anything to consider and they’d probably flop. While they aren’t flying off the shelves like that PS4’s did, they are still fairly popular and there is already a decent selection of consoles to choose from, along with a decent following of fans and users behind their controllers. Most notably of the selection is the OUYA, of course, but there is also the Gamestick, the NVIDIA Shield, and the newly released M.O.J.O. console from Mad Catz, and a couple others. Now, Zero Devices is starting to tease the Android gaming crowd with their very own entrant into this upcoming battle. The Z6C. As far as Android game consoles go, it’s an Android game console.

What does the Z6C have to offer that the others don’t? Is it going to be competing in price with the OUYA? Well first off Zero is toting this as an entertainment box. We know better though zero.. because we can see the controller in the picture. You can’t pull one over on us. No sirs. If you take a look at the box yourself, you’ll see that it has two USB ports on the side, what looks to be a microSD card slot next to the two USB ports, (it also comes with 8GB of internal storage)and from what is listed in the same photo at the bottom apparently has LAN capabilities which means there’s an ethernet port. Hold the phone though, because it also has Bluetooth 4.0, it supports WiFi 802.11 a/b/g/n, comes with an HDMI port(for the big screen connectivity), and all this is powered by a quad-core Rockchip rk3188 processor. 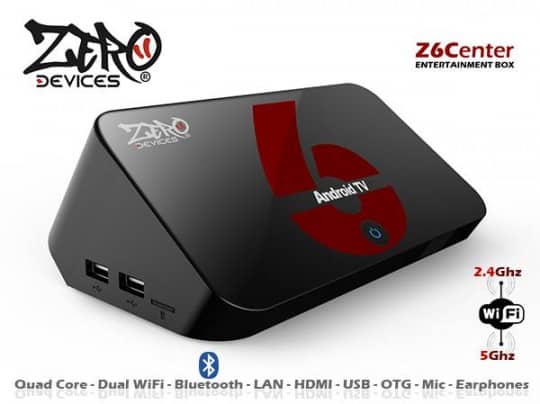 The Z6C also has 2GB of RAM, so it should be able to handle whatever gaming stuff comes its way, although personally, and I think I can speak for all the gamers here at Android Headlines, we would like to see just a little more RAM in this thing. At least more than what my Nexus 4 can handle. All in all this sounds like a decent little Android Console, so long as the price is good. The Z6C is rumored to be running Android 4.4.2 when it ships, although this hasn’t been confirmed of course. The Z6C was teased on Twitter by @ZeroDevices yesterday morning just around 4:20am. Besides the details listed here, there was no mention of price, nor when the availability would begin. There was also no mention of if this would even support the Play Store, although I imagine it wouldn’t be a proper Android Console if it didn’t. That is unless its taking a similar route to the one the OUYA took. I suppose we’ll just have to wait until more details start to surface, as Zero has said the device is “Coming Soon”. Perhaps keep an eye on their twitter page if you want to the minute updates on the Z6C. Rest assured though we’ll let you know if something new and noteworthy pops up regarding the Z6C. Would any of you consider this if the price was right?