It seems like everybody sporting Google Android 4.4 KitKat is getting an early Christmas present with the Over-the-Air (OTA) of Android 4.4.3 KitKat, and now we hear from our friends at Android Police, that the Samsung Galaxy S4 Google Play Edition (GPE) is starting to receive their upgrade. Remember, these upgrades are always on a rolling basis, so you may not receive it right away – be patient and give it time – yeah, right! The firmware version is I9505GUEUCML4, which is Android 4.4.2/KOT49H, and this will bring it up to date with the current Nexus devices.

In addition to the changes made, there is a device specific update for the Galaxy S4 GPE owners – many owners noticed that HSPA/HSPA+ connections were displayed as “3G” rather than the “H” like it did in Android 4.2.2 and 4.3.  This new 4.4.2 update fixes that and you will now see the “H” again, not the “3G” symbol.  Another device specific fix is the erroneous inclusion of the “Home Screen Tips” widget that went back to the old days of Gingerbread.  How this ever made its way into the prior build is anybody’s guess, but that too has been removed. 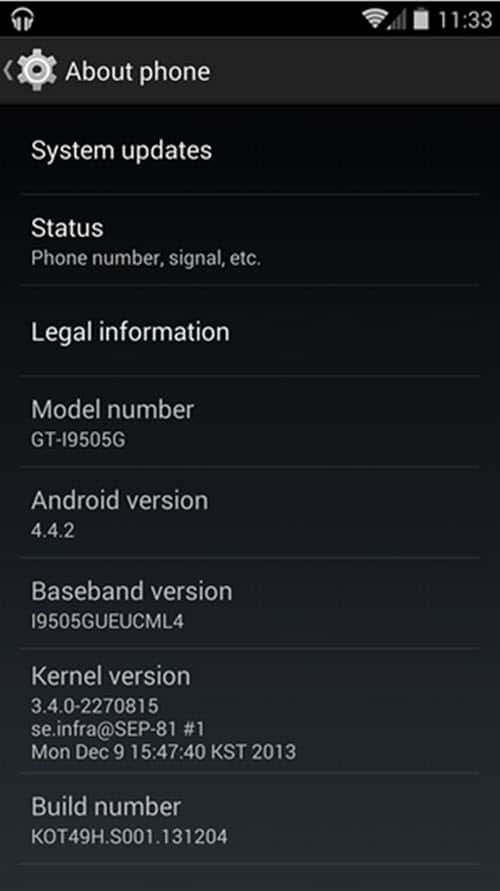 The most exciting enhancements done were with the camera – there were updates in Android 4.4.1, but further work was done in 4.4.2 – with a decent sensor and Optical Image Stabilization (OIS), the hardware was there, but not the software and processing.  The camera suffered from long startup times, a poor interface, slow focus speed, and poor image quality – but it looks as though Google is trying to fix those issues.  Improvements were made in the HDR+ area, with progression indicators everywhere so you will know exactly what the camera is doing, rather than simply waiting for the lag to stop, and the addition of three camera resolutions, 2MP (16:9), 1 MP, and 720x480px.

The major bug fixed were the “Hijacked Sharing,” “Exchange Mail,” “SMS DOS,”  “Seeking On the Lock Screen,” as well as the “Dialer” was polished up a bit.  The Transparent System Bars are now present, as they were on the Nexus 5, as Google strives to make this a consistency throughout the KitKat platform.  The Status Bar Icons are now lined up properly – they were off slightly.  The Settings Icon now has a dark circle in the middle, making it look a little more like a “sophisticated” gear.  The Gallery and Photos area continues being tweaked and it looks like Google is working toward getting rid of the photo Gallery, with Photos ending up replacing it.  A few Keyboard changes seem to deal with a “softer” sound when you press the keys.  The number of connections permitted with Bluetooth LE was increased from four to seven.  Again, this is just a few of the many changes in the KitKat 4.4.2 update.

Let us know on our Google+ page if you have received your Galaxy S4 GPE has received its upgrade and if you notice the changes, especially in the camera area – do you believe the picture quality and user experience have been enhanced?