Skip to content
Trusted By Millions
Independent, Expert Android News You Can Trust, Since 2010
Publishing More Android Than Anyone Else
27
Today
98
This Week
544
This Month
5678
This Year
115682
All Time When we reviewed the Nexus 5, we found that the vast majority of the phone easily made it one of the best smartphones out there, Android or otherwise, especially when you take a look at its price tag. However, as with Nexus devices in the past, the camera this time around was yet another disappointment. In testing, I found the camera to be adequate but both inconsistent and extremely slow. Sure, if you have a minute or two to stay perfectly still and take a few shots, then you can end up with a good result. However, it’s 2013 – soon to be 2014 – and we simply don’t have time for patience these days, especially when it comes to our smartphones. As such, the sluggish performance of the Nexus 5’s camera was a big let down, indeed.

Reports of Android 4.4.1 aren’t crazy rumor and as The Verge reports, this update is aimed squarely at fixing the camera in the Nexus 5. David Burke, Google’s Director of Engineering for Android, has a lot to say about the upcoming update but, the main focus of this point release is speed and better detail in different lighting. The camera app in Android 4.4.1 is said to launch a full second quicker than in Android 4.4 and shooting in general has picked up speed. This is down to the focus on greatly improving autofocus, something that seemingly took forever on a Nexus 5 out of the box. With the autofocus sped up and things like the white balance and exposure all getting touches too, the Nexus 5’s camera finally starts to act the way it should. The Verge has compared the end results and it’s clear the update is a little more “true to life”. 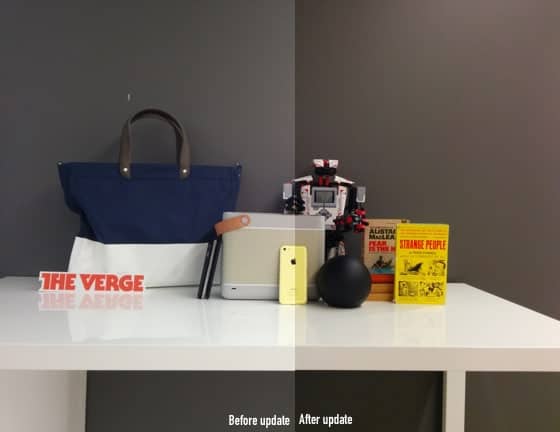 It’s a challenge to reach a balance between speed and image quality, with the Nexus 5 it was too much of one and not nearly enough of the other. Thus delivering a sub-par shooting experience we’re not accustomed to. The update is said to drastically improve the Nexus 5’s camera performance and deliver a shooting confidence that before was just never there, no longer do you need to wait for the Nexus 5 to take a picture and on the whole, the camera is a lot more flexible. The Android 4.4.1 update is to roll out over the next few days and for Nexus 5 updates, should make KitKat a whole lot tastier.