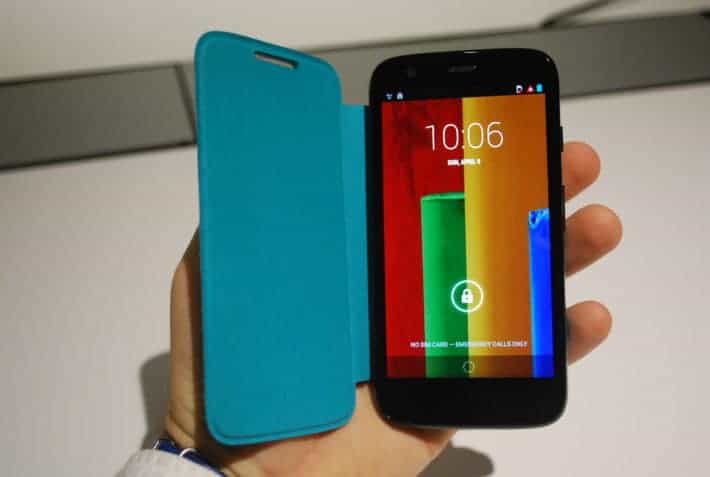 The Moto G is the other Motorola phone that was released this year that was pretty interesting. It’s a pretty good device, considering it’s only $179 for the 8GB version and $199 for the 16GB version. And remember that’s without a contract. The Moto G features a 4.5-inch 720p LCD display, 1GB of RAM, quad-core 1.5GHz Snapdragon 400 processor, 8GB/16GB of internal storage, 5MP shooter on the back and a front-facing camera. There’s also a 2070mAh battery inside. Which from what we’ve seen, it appears to be pretty good.

The Moto G launched on Amazon earlier this month, and the shipping date continually got pushed back. As most of you know the Fort Worth/Dallas, Texas area was hit with a pretty heavy ice storm about a week ago. Which was in the middle of Motorola’s Cyber Monday sales for the Moto X. And that was when the Moto G was supposed to start shipping. FedEx also say some delays as well. But it appears that is all worked out now. As we’re getting reports of the Moto G shipping now from Amazon. Which is good news for many.

The Moto G is definitely a great stocking stuffer this holiday season. Honestly, where else are you going to find an off-contract smartphone for this price? With this kind of performance and specs? It’s going to be a tough one. The Moto G is running stock Android. There’s no Active Display, or Touchless Control here on the Moto G, which is kind of sad as those are some of my favorite features of the Moto X. But it is expected, since the Moto G had to cut corners somewhere to meet that price point.

For those of you interested in picking up the Moto G, we’ve got the links down below. There are four versions. There’s the 8GB and 16GB versions, then there’s also the USA and GSM versions. Which we have them all linked below. The Global GSM version is good for those that travel internationally, otherwise, I’d suggest sticking with the US version.