USB Battery Packs are a commodity that most of us take for granted. They are great for emergencies or long Ingress sessions but they all have a serious flaw that prevents it from being practical in third world countries that lack the infrastructure to recharge them.

For some users, plugging your USB Battery Pack into the wall for an overnight charge is simply not a luxury that they can afford. This is the market that UPP is looking to target. Unlike a USB battery pack, UPP is a USB Fuel Cell Engine that is powered by a replaceable fuel cartridge. The cartridge is also intended to be refillable.

When users need to juice up their mobile devices, they simply connect the cartridge onto the fuel cell engine via a strong magnet and the small engine begins to crank out power. The user simply connects their phone via the full sized USB port and waits for their phone to be charged up. The fuel cartridge is enough to charge most smartphones around 5-7 times and can keep most feature phones juiced up for a month. The unit’s exhaust port was designed to release its exhaust at a temperature lower than the typical human body temperature in order to prevent burns.

The fuel cell was created by the British firm Intelligent Energy and seems to be targeted towards developing nations. In an interview with The Next Web, the CEO of the company, Dr Henri Winand, said : “The first two billion consumers [in] the world have infrastructure everywhere… when you get to the next two billion you find that there is actually an aspirational and disposable income, but an infrastructure that is not as capable. This is a rechargeable fuel cell, like a sponge, when it has given all the fuel out you put some fuel back in. In a very small bottling facility, essentially.” 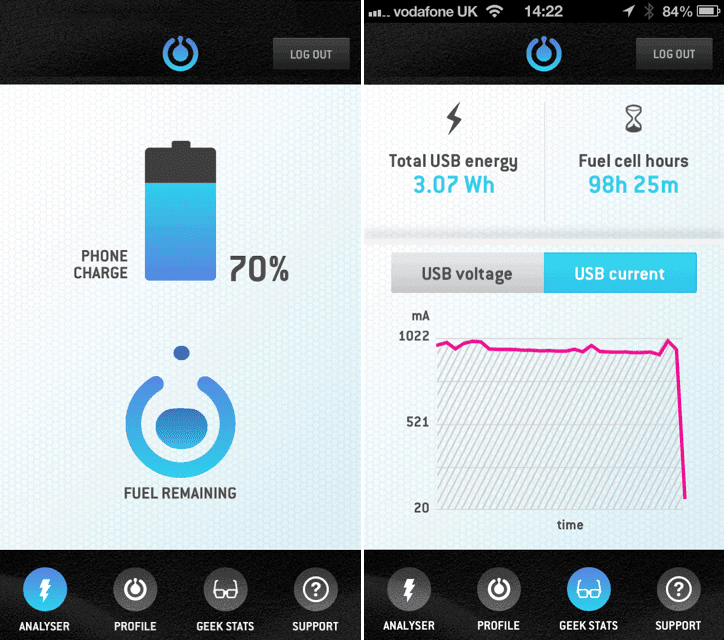 This is not the first USB Fuel Cell Engine that has been developed but Upp has one very intriguing feature, a smartphone app that allows users to monitor and control the unit. Fortunately this is not similar to another “Unique” fuel cell that we featured once before. Users are able to see the fuel levels in real time via this mobile application.

The company estimates a potential price tag of around $199 USD for the unit however this is likely to get lower. We are unsure on when this product will be ready for sale. This product is likely not destined for countries with a developed electrical infrastructure.