Samsung has never been afraid of experimenting with all sorts of sizes for smartphones and tablets, and break the status quo of what was considered a “normal smartphone” or a “normal tablet”. They’ve made devices of pretty much any size from 3″ to 10″, and now they are going to go beyond that with an upcoming 12.2″ tablet, that’s supposedly arriving soon.

Whether this will be a regular Galaxy Tab, or a larger Galaxy Note, it’s not sure yet, but earlier rumors have pointed to a 12.2″ Galaxy Note. It also makes sense for it to be a Note, because artists or students who would like to take notes on their tablets with a pen, would want bigger real estate to work with.

However, if Samsung wants to make this tablet a big success, they need to do more than just make the screen bigger. They need to sell a keyboard accessory along with it, too. At 12.2″, I think it makes more sense as some sort of “hybrid” than a stand-alone tablet. Maybe it shouldn’t be the same kind of accessory that Asus makes for its Transformer, because those tend to be pretty heavy and expensive, because of the battery inside, but one more like Logitech’s Folio cases for Samsung’s Galaxy Tab 3: 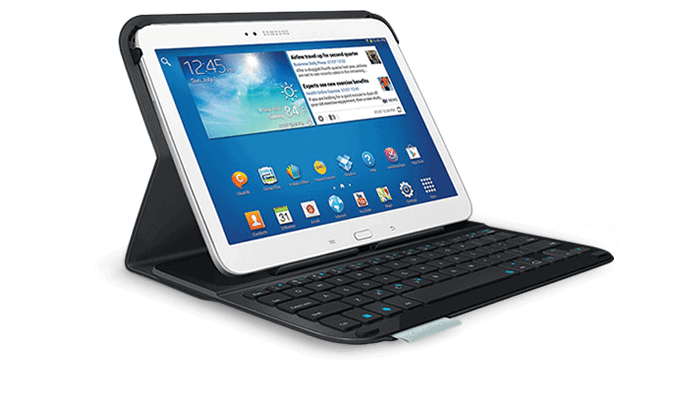 To me that looks like an almost ideal keyboard case for tablets. It covers the tablet on all sides, it has a keyboard that you can use when you want to do some work on it, and it can also be used at a certain angle like a laptop. There’s little else I’d want from such an accessory other than a varying angle for the tablet, and for it to be solid enough on the back, so it doesn’t move when you touch the screen (something I really dislike on the vast majority of “touch laptops” out there).

Samsung has also promoted its Galaxy Note 10.1 for work many times so far, and if they will keep promoting it that way, then a keyboard accessory for it makes perfect sense, too. I think 10″ tablets are actually too small to do work on them, not just because of the smaller screen, but also because of the smaller keyboard. If the device itself is 12″, then the keyboard will be bigger, too. Samsung has already made the move with “multi-windows” for productivity, so a keyboard accessory like Logitech’s Folio seems like the next logical step for their Note tablets.