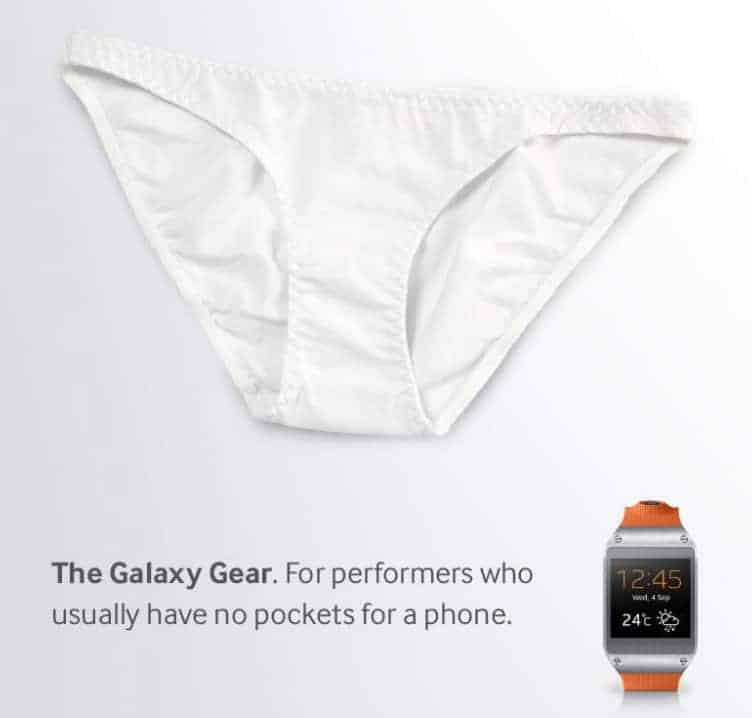 We have all seen a lot of Miley Cyrus, whether we wanted to or not. Some of us have even tried to twerk much like the star has. Not that we're anywhere near as good at it as she thinks she is though. Since Miley is everywhere, it's only natural that using her to advertise your "green tomato"  of a device seems like a grand idea.

Samsung UK recently tweeted out a humorous picture with the caption:

For performers who usually have no pockets for a phone.

The picture is of some underwear that you might have seen the performer wear while swinging into walls and such. The tweet says:

Hey Miley, you should have a look at our Gear.

Is this an attempt to actually have a conversation with Miley Cyrus, self-throned queen of the twerk and blunts? The Galaxy Gear has not been doing too hot in the sales department, or at least that's how it seems. The confusing part of the tweet comes in two parts for us.

First of all, we were under the impression that the Galaxy Gear needed to be connected to a Galaxy Note 3 or a Galaxy S4, which are pretty big devices. If not in a certain proximity of the phone, the Galaxy Gear may not work properly. Now realism aside, if she was able to find the room somewhere, how safe would the device be with those dope moves that Miley is known for?

I mean after all, she is almost having seizures on stage, and a device of any kind might not survive those thrusts and foam fingers. Not to mention, how sexy could one look while in lingerie with a smart watch still on their wrists? All jokes aside, the tweet is picking up some traction, so this could actually help exposure for Samsung, Ms Cyrus has plenty of that already.

Hey Miley. You should have a look at our Gear. pic.twitter.com/Csj4QdpSPe