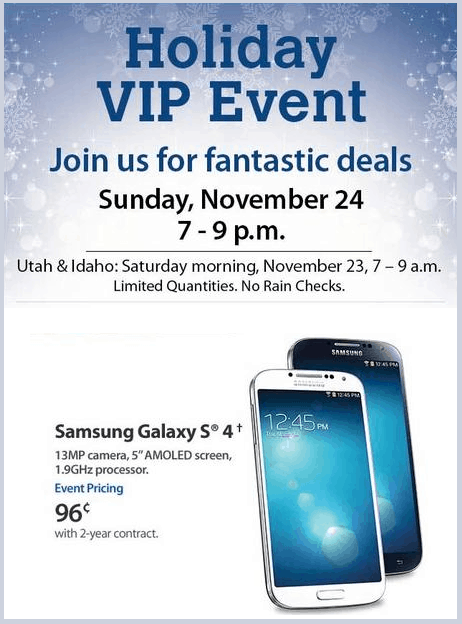 It's that time of year again when consumers crack open their piggy banks and fill their shopping carts with hundreds of dollars' worth of marked down electronics. With only two weeks left until Black Friday – a customary tradition where American's spend countless dollars on things they don't need after giving thanks for the things they already have – deals on electronics and other items are beginning to leak out. PhoneArena reported one such leak that Android enthusiasts, and Sam's Club members are likely to flock to.

According to the website's source, the member-only store will be offering the Samsung Galaxy S4 and the HTC One at an incredibly low contract price of only 96 cents each. Sprint customers can purchase either the black or silver edition of the HTC One with a two-year contract. The Galaxy S4 will also be available with a two-year contract, but on all Sam's Club carriers including Sprint, AT&T, Verizon Wireless and T-Mobile.

In addition to the inexpensive flagship phones, it is suggested that Sam's Club may also be discounting AT&T's Samsung Galaxy Mega 6.3 for $24.88, and Verizon's Motorola Droid Ultra in either black or white for $98. Both offers will require a two-year contract.

As listed on The Black Friday Site, the Galaxy S4 will indeed reflect the pricing as leaked to PhoneArena, and will be available only during Sam's Club's Holiday VIP Event on Sunday, Nov. 24, from 7-9 p.m. Although the other phones are not listed, this does not necessarily mean they will not be listed once Sam's Club Black Friday deals go live.

Being a Sam's Club member comes with a price however; if you are not already registered you will need to pay a minimum of $45 for a membership card before you can start shopping. In either case, less than $100 for a flagship device is a pretty great deal, and an even better stocking stuffer.