The Samsung Galaxy Note II was announced just a little over a year ago. It was officially unveiled at IFA Berlin in August of 2012, and released in several markets in October. It launched running Android 4.1.2 Jelly Bean. When Google began rolling out Android 4.2, Note II owners were left in the dark for months. It was finally revealed back in July that the Galaxy Note II was going to skip Android 4.2 completely and jump right to 4.3. That update is about to begin, maybe in less than a week. SamMobile has received a leaked firmware build of Android 4.3 Jelly Bean for the Galaxy Note II GT-N7100 variant.

This is actually the second Android 4.3 build that SamMobile has leaked, so big ups to them and their tipsters. This is supposed to be the final build of 4.3 Jelly Bean for the GT-N7100 version of the Note II. The GT-N7100 is the international GSM variant with support for UMTS/HSPA connectivity. This 4.3 firmware build should be what users get when Samsung begins pushing the update out officially. There may be a few bug fixes, but that would be the only changes made. 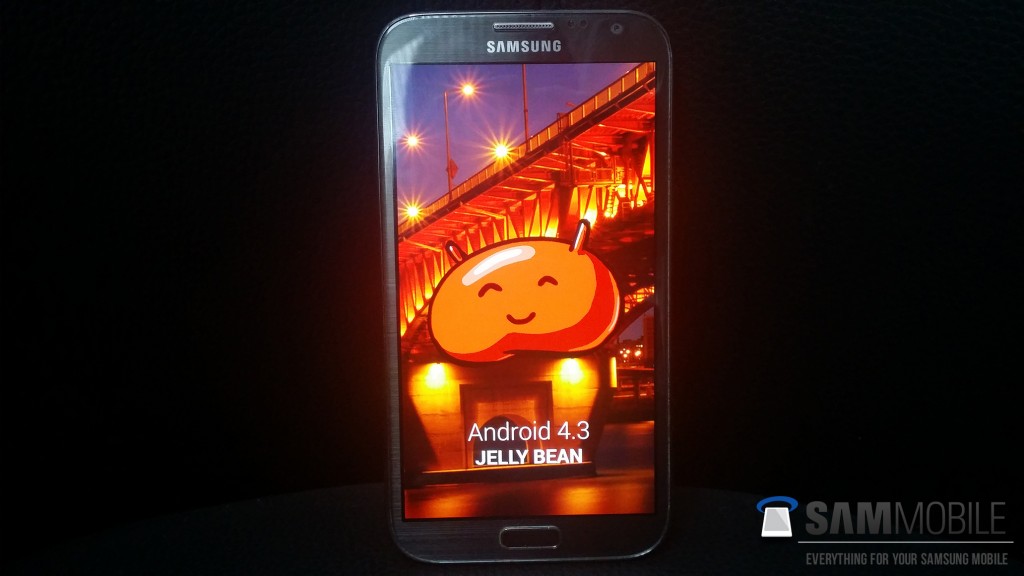 SamMobile has been testing this build for several days and has found it to be “pretty stable.” Samsung has updated the user interface to look like the Galaxy Note 3 and GS4. Even the tabbed settings are included. Samsung Wallet and Samsung Knox are all there too. Android 4.3 was a minor update, but this will also bring all of the Android 4.2 features to the Note II. That means Note II users will now officially get Face Unlock and Google Now, along with all of the other 4.2 and 4.3 features.

If you’re a Galaxy Note II owner and want to update to Android 4.3 Jelly Bean, just follow the instructions below from SamMobile. They also have a bunch of screenshots of the new build if you’d like to take a look before you flash the update. Keep in mind that this is for the international GSM version of the Note II. If you own any other version, please don’t flash this update as it could cause you problems. As always, tinkering with your device is something that you do at your own risk. Be careful, and have fun!