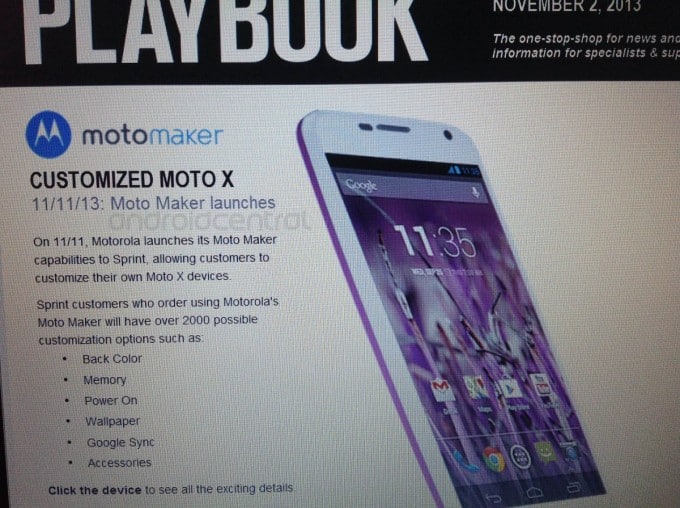 We all know that AT&T has had an exclusive on MotoMaker for the Moto X for a couple of months now. But it seems like that exclusivity is about to end. We've already seen plenty of rumors and leaks that Verizon will be getting MotoMaker support on November 11th, and now a leaked screenshot from Android Central is showing that Sprint will be getting MotoMaker on November 11th as well. As noted, the memo reads "On 11/11….Motorola launches its Moto Makers capabilities to Sprint, allowing customers to customize their own Moto X devices."

The memo also shows that you can customize the back color, memory, power on messages, wallpaper, add Google sync, and your own accessories. Which that we already knew about since it was announced back in August. So there's not too much of a surprise there. Chances are, it'll also go down in price, which also shouldn't be too big of a surprise. Especially since the AT&T version has already dropped $100.

Notably missing is still the wooden backs, which Evleaks says is still coming. And will cost about $50 more. Also where is the custom engraving? I'd love to get "Android Headlines" on the back of my Moto X. I know MotoMaker has been the reason why a lot of people haven't picked up the Moto X just yet. It's nice to see the Moto Maker making its way to at least Sprint and Verizon in about a week. Hopefully it'll be available for the unlocked and developer editions of the Moto X as well. Like those that want to buy the Moto X for T-Mobile.

So AT&T's exclusive on MotoMaker is quickly wearing out, which is a really good thing. I still think that exclusive was pretty sad, but I'm sure Motorola has a good reason for it. So how many of you Sprint people are going to pick up a Moto X when the MotoMaker is available on Sprint? Let us know in the comments below.