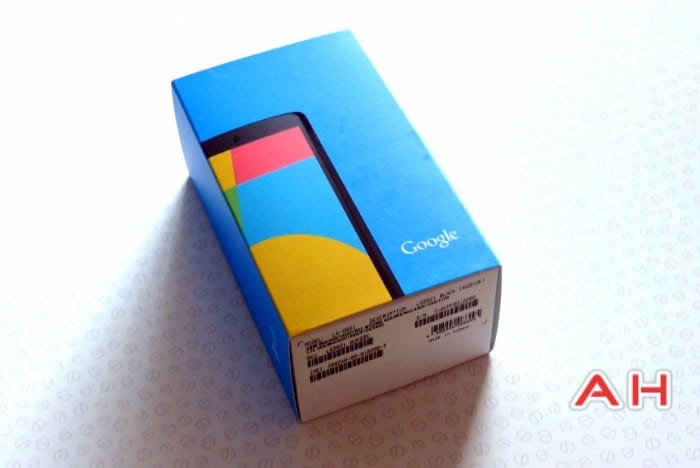 That's right, the Nexus 5 has finally arrived at Android Headlines, well at the UK arm of the site at least. I took delivery of my Nexus 5 earlier today and I've had a little time to play with it and come up with some initial impressions of the device. First of all, we should talk about how easy it was for this year's Nexus to arrive at my door. I ordered the Nexus 5 say, five minutes after they went on sale, and I was lucky enough to get one of the first batches. Overall, ordering a Nexus 5 has been far easier than ordering a Nexus 4 was this time last year. While the black 16GB version is facing some pretty lengthy delays right now, Google and their partners have done a pretty great job of getting these units into the hands of users.

These are just some initial thoughts on the Nexus 5, I will confess to having no business behind the camera when filming – I can take a decent photo and enjoy doing so but, filming is not one of my strong suits. Which is why I've decided to put a post together to better get across my thoughts on the Nexus 5. Don't be afraid to reach out in the comments or over on Google+, where we're always happy to hear from readers.

On to the hardware of the device and I was pleasantly surprised. I wasn't expecting anything too brilliant, considering the brilliant price tag this guy holds but, I found a solidly built device. It's remarkably light yet still feels sturdy and the ceramic volume and power buttons feel nice, if not a little "rattley". The soft touch coating on the Nexus 5 is really nice, allowing the svelte device to stay put in use and deliver a touch of class all in the same breath.

For me, displays are a pretty big thing and that's the main reason why I haven't let go of my One X for so long until now. I honestly don't like AMOLED too much and prefer IPS panels. I'm happy to report that the display in the Nexus 5 is bright – very bright – vivid and very crisp. Colors are accurate and bright, with crystal clear text. The touchscreen responsiveness is great too and overall, I'm very impressed by LG's display within the Nexus 5. Of course, this is my opinion but, at this price point, you're not going to do any better when it comes to displays.

The Snapdragon 800 inside of this year's Nexus is obviously going to deliver some great performance and Android 4.4 KitKat really takes advantage of that. While swiping through screens, browsing the web and saying "OK Google" far too many times, I found the Nexus 5 to be one of the fastest devices I've used in a long time. The feeling I got while using the device is that the Nexus 5 was challenging me to do something, waiting for me to move. It's that fast. We'll have more on the Nexus 5 in our full review coming shortly and don't worry, we'll pay close attention to KitKat as well.