Now that the Nexus 5 is officially out there, available from the Play Store and shipping to customers all over the place it’s time for the Sprint version of the device to launch. We knew the Nexus 5 was coming to Sprint a long time ago, in fact we were one of the first to spy it on Sprint’s website. This is the first time that Sprint users have been able to have a Nexus device since the Galaxy Nexus as LG’s first Nexus was absent from the network. While the relationship between Google and Verizon is most likely beyond repair at this point, it seems that Sprint and Google can still sit down and have a beer together. Even if GSM is where Google’s heart lies, it’s nice to see them showing Sprint users a little love. 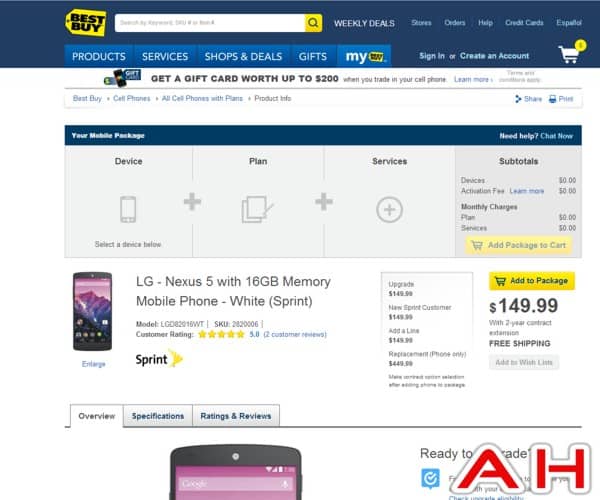 While the Nexus 5 still presents itself as a good deal unlocked at $349 for 16GB, Sprint users will need to cough up $149 on contract, and can do so at Best Buy starting today. That’s not the same sort of deal GSM users can enjoy but, it’s still not a bad deal. What’s a little unclear right now is whether or not Best Buy will allow existing Sprint customers to purchase the Nexus 5 outright but, we can’t see any reason why they wouldn’t. So, perhaps it’s worth heading down to your local Best Buy to find out. It’s available online and it appears to be available in store, too.

It’s a shame that the Nexus 5 isn’t available on Verizon too but, with Sprint users now able to join the Nexus party, this year’s Nexus is one of the most accessible in recent years and it also appears to be a much more capable device than last year’s Nexus 4. You can see how it shapes up next to last year’s in terms of camera performance here. We’ll have some more coverage of the Nexus 5 in the coming days and there’s already quite a bit on the site, so stay tuned.