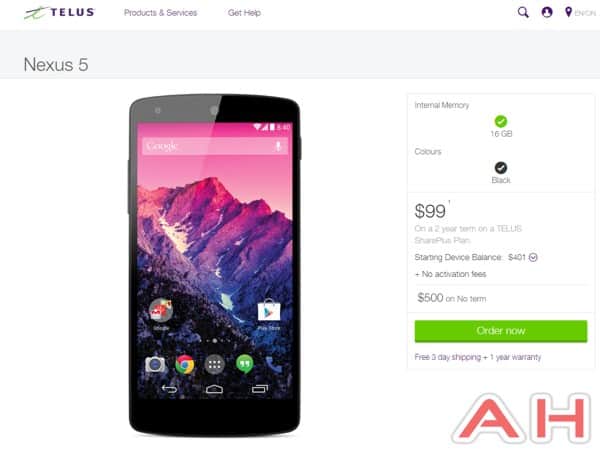 Now that the Nexus 5 has had its day in the sun on Google Play, it's time for it to launch elsewhere, too. The Nexus 5 is available on Sprint today and it's coming to Canada too, available from TELUS today. Pricing with this one is a little strange though, as it's going for just $99 on a two-year contract or, $500 outright. Which makes absolutely no sense considering the Play Store is selling the very same model for just $349. We've seen this sort of thing before though and, we have no doubt that we'll see it again in the future.

For those up north that are looking to get the Nexus 5, you can take a look at the specs below:

Of course, the Nexus 5 is more about its specs, it's shipping with the latest version of Android, 4.4 KitKat and actually feels rather nice in the hand. With a minimal design, it's not going to stand out like other devices but, that's sort of the point. The design is supposed to mostly get out of the way and let the software do all the talking. Which is exactly what the Nexus 5 does, get out of the way. It's a great device for those looking for stock Android without breaking the bank but, obviously don't buy it from TELUS outright. For those worrying about the camera, you can see how it compares to last year's Nexus 4 and battery results will be included in our full review coming shortly!