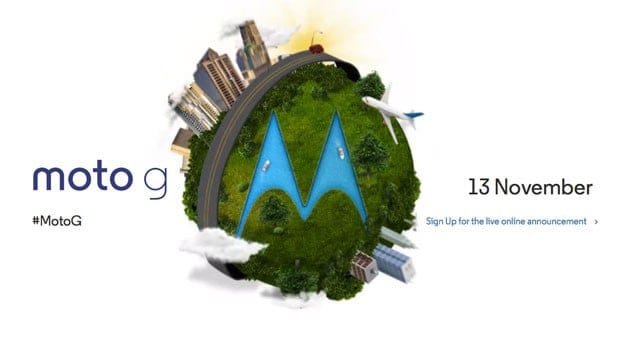 We've been hearing about a lower-cost Moto X ever since the original was finally announced unto the world. The Moto X itself has gotten a little cheaper lately, taking a price-cut on the major networks and through the Moto Maker site. However, it seems that Motorola is not content with that and they're looking to really deliver a genuinely affordable experience cut from the same cloth as the Moto X. We've now learnt that this device is going to be the Moto G, thanks to @evleaks and some more leaks coming from the UK.

We saw what looks like promotional material for the device leak just before the weekend and from that, we got our first look at the specs of the device, which we'd certainly call "affordable":

Now, Motorola is teasing the Moto G to be announced November 13th, which is less than two weeks from now. The website, Moto-g.com doesn't really have much to show us, just a small globe that changes and the date of November 13th. There's no word yet whether or not the Moto G will be making its way stateside but, there's a strong possibility of such a thing. An unlocked Moto G could run for somewhere between $200 and $300 which would give everyone an opportunity to purchase one, pretty much but, the Nexus 5 did recently just launch for $349 on the Play Store.

No matter what though, it's going to be good to see Motorola release other devices, even if they aren't meant for those looking for the best specs or those that can't afford such devices. Since the Moto X launched, Motorola has gotten back on its feet but, it's going to take some time for them to start running again, to stop the losses and make sure they continue to release great devices like the Moto X.