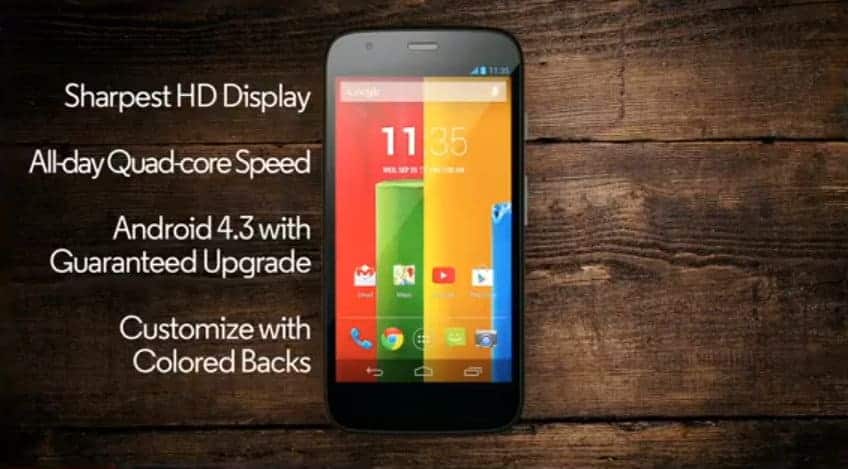 We've know that a more affordable version of the Moto X has been coming since the launch of the Moto X itself but, in the last few weeks we've been hearing more and more. The Moto G has been leaked a number of times already as a more affordable version of the Moto X. A device that features much of the Moto X's DNA but, cuts corners to reach a very attractive price point. Especially for those on a budget and developing smartphone markets. While it might not look so impressive on paper, the Moto G is designed to be very affordable and when you take into account its price tag, you'll soon see why the Moto G isn't as feature-rich as its older brother.

On stage, Dennis Woodside, CEO of Motorola Mobility, spoke about the choices that those who cannot afford a Galaxy S4 or an iPhone 5S have to make when buying a cheaper smartphone. The Galaxy Fame was used as one example of this, a current phone with yesterday's technology like a poor display, weak processor and poor build quality. The other option was the iPhone 4, an older "premium" device that can be purchased for much less. The Moto G on the other hand, is a current smartphone with current technologies available at a much cheaper price.

Motorola's Moto G features a Quad-Core Snapdragon 400 at 1.2 Ghz, a stunning 4.5-inch 1280 x 720 LCD display and a 2,070 mAh battery. Motorola have been gunning for a premium experience at a great price. With a price tag of just $179 in the US, unlocked from motorola.com for 8GB of storage, we're pretty certain that Motorola have done this. Those looking for a little more space can opt for the $199 for 16GB. Sharing a lot of DNA with the Moto X, the Moto G will offer removable back plates in a variety of different colors, as well as a range of bumpers and cases that compliment the Moto G.

For those wondering if a low price would hurt the software, they need not be worried. The Moto G features Android 4.3 and has a guaranteed Android 4.4 KitKat update for January of 2014, which is much more than even the highest-end manufacturers can say.

The Moto G is an excellent chance for Motorola to regain lost ground outside of the US. With Europe having gone for such a long time without a release from the ailing phone company, the Moto G might be able to restore some faith in the brand. No matter how good the Moto G is for the money though, it's up against stiff competition. Samsung rules the low-end almost as much as they do the high-end and with a vast range of devices on a budget, Samsung has a lot to offer to the price conscious consumer. HTC, too have been focusing more on the low-end and mid-range sectors of the market but, if Motorola can target their markets with the right sort of advertising it could be a good chance for them. For more info on the Moto G, keep it locked to Android Headlines.