Yesterday, amid all of the Nexus 5 and KitKat news, @evleaks was up to his old tricks and let slip about the Moto G which looks very much like a Moto X with a Quad-Core CPU and just 8GB of internal storage. Now, GSMArena have been passed some more info concerning the device that sheds a little more info on the device as a result of what looks like a promo destined for UK retailer Phones4U.

We’ve been hearing about a lower-cost, more affordable Moto X ever since the original launched earlier this year. We had been hearing about a device called the Moto DVX which could well be this new, mysterious Moto G device. Thanks to this latest leak, we can make out the following specs:

Taking a look at the Phones4U website, the font lines up and so too, does the Christmas decorations dotting the above promo and the ones used on the site. Launching a device like this at Christmas doesn’t sound like a terrible idea for Motorola. After all, a lot of parents in the UK will be heading out and buying their teens their first smartphones or, rescuing them from their aging BlackBerries. The @evleaks leak suggested that this Moto G was to be free on contract which, isn’t uncommon in the UK but, the tariff prices will determine how well it sells and considering there’s no mention of 4G, we doubt this is going to cost all that much month-to-month. 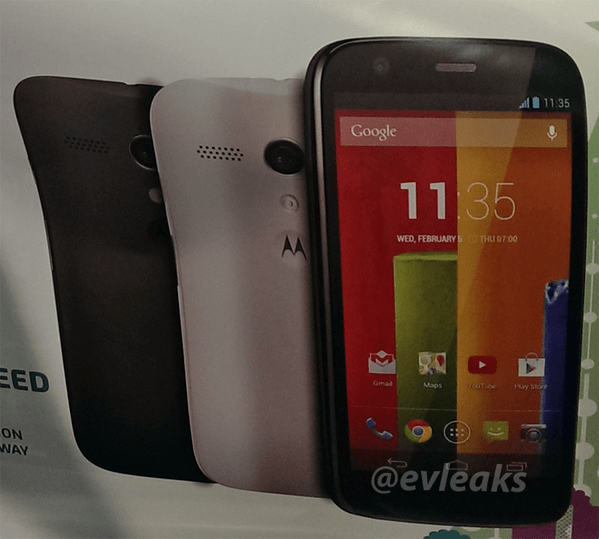 No matter what though, it would be great to see Motorola release a new device in the UK and across Europe as a whole. If the device is heading to the UK, then we have no doubt it’ll make its way a little further East and could end up being a popular device in parts of Western Europe.