While Qualcomm has introduced a faster version of their Snapdragon 800, in the Snapdragon 805 there’s another chip manufacturer in town making some noise. MediaTek, a company that makes processors and other chips for mobile devices, has just announced their newest processor, the MT6592. This chip features eight cores that can all be active at the same time, which MediaTek says makes it the first true octa-core processor available. The company said last month that the new chip would arrive on November 20, and here it is, right on time.

Samsung has used eight-core processors in the past, most notable in the non-US variants of its flagship devices. But MediaTek believes their chip is different because all eight cores can be used simultaneously for faster performance, whereas the Samsung chips could only use four cores at a time, switching between high and low power modes.

The MT6592 is an ARM Cortex-A7 based 28nm architecture chip and can be clocked as high as 2GHz. MediaTek also says they have made advances in performance monitoring, allowing the system to intelligently monitor things like temperature and energy use to provide the best possible performance. The chip natively supports 4K video processing, as well as the newer VP9 video codec. It can support camera sensors up to 16MP and can drive up to 1080p displays. 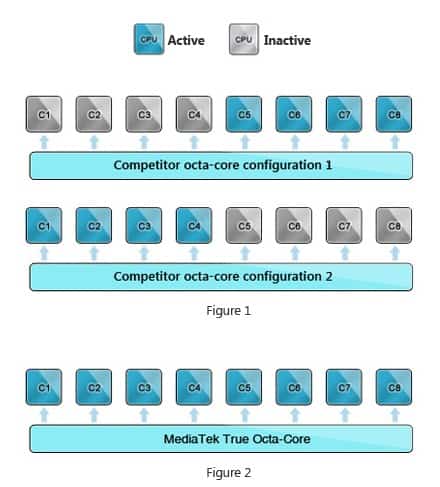 MediaTek chips are used by a variety of manufacturers, including many Chinese phone makers like Xiaomi. Samsung is even rumored to begin using certain MediaTek chips in 2014.

Are eight-core chips really needed in the mobile space? MediaTek and Samsung certainly think so, and spec sheets are always important. Motorola, though, has famously bucked the trend with their Moto X and the X8 chip inside. The Moto X only as a dual-core CPU, but Motorola has moved many of the mundane tasks to extra “helper” processors, so things like language processing aren’t done by the main CPU, freeing it up to do other things. The Moto X received great reviews (read our review for more), so despite only having a dual-core chip, it still performed well.

Will average consumers notice the difference between dual-core, quad-core and now octa-core processors? Maybe not, but more power is never a bad thing, and could enable a new class of apps and games that we haven’t seen yet. MediaTek says the MT6592 will begin appearing in devices by the end of 2013, which is just over a month away.