Update: We wish to clarify this information here. LG is not working with IMAX nor has a license to use the IMAX term. IMAX also believes it’s impossible for LG to replicate IMAX technology on a 6-inch 720p display that is curved. We apologize for any inconvienience here.

LG’s G Flex is seemingly the hot new thing, at least if you go by LG’s promotional material and ad campaigns.  In this latest ad campaign, LG likens the G Flex to a mobile IMAX screen, given that it’s curved inward in the same way an IMAX screen is.  Let’s also not forget that it’s a 6-inch screen, which fits perfectly with their mini-IMAX screen size analogy too.  You can see pretty easily from the promo shot that they’ve released how closely it resembles such a screen, given that it bends in from top to bottom unlike the Galaxy Round which bends in from the sides.  LG and Samsung have been coming at the flexible display technology from different angles, where Samsung is saying their design is more comfortable in the hand, while LG here is saying it’s better for entertainment purposes.

Let’s also not forget that the G Flex is actually flexible whereas the Galaxy Round is not.  If you place the phone on a flat surface and press down, the G Flex can completely flatten out, meaning that this sucker is going to be incredibly hard to break.  Hopefully this means no more cracking your screen when you drop it on the ground.  There’s also the crazy self-healing material used on the back of the G Flex that fills back in when you scratch it, although it’s going to be left up for testing to see just how deep that scratch can get before it can’t be filled in anymore.  You might also be pleased to find out that official accessories for the G Flex have been leaked out, showing a number of interesting cases for the new device. 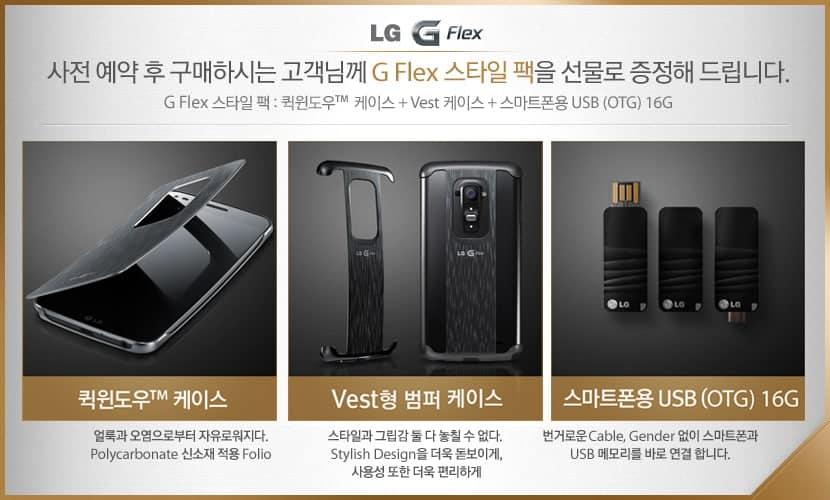 Here you’ll find the same Quick Window case that LG unveiled with the G2 back in August, except bended to fit the phone of course.  You’ll also notice a rather interesting vest case, which presumably keeps the phone from bending too much, but I’m not entirely sure what the point of that would be since that’s a big selling point of the phone.  Then there’s the 16GB USB OTG drive that will allow you to both put the drive into your phone and into a computer.  Again not entirely sure why you’d want to do this since you can just plug the phone into the same computer, but an extra 16GB of portable storage is never a bad thing.  Look for the LG G Flex in South Korea this coming week, and in the US and internationally hopefully by the end of the year.  Check out the full ad below for some dramatic music and nice shots of the phone.