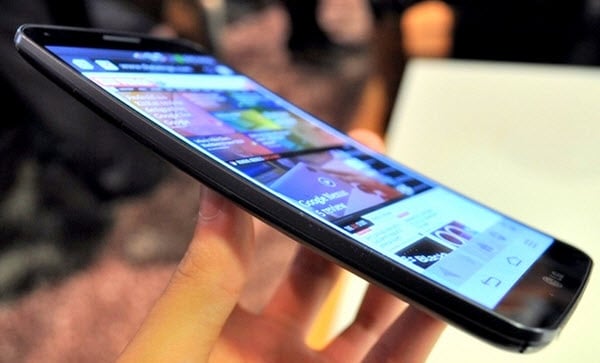 When a new phones comes out, one of the hottest videos you'll find on Youtube featuring that phone is a drop test.  People love to watch stuff break, especially expensive stuff that they can't afford to bust just to test said device's endurance.  While drop tests can be a great real-world indicator of how well the phone will survive a potentially fatal fall, they may soon be a thing of the past.  LG Announced the G Flex not too long ago, and just launched it last week in LG's home country of South Korea, and it looks like the phone could potentially be coming to the US on AT&T and Sprint if the latest leaks and rumors are anything to point to.  Besides being oddly flexible, the LG G Flex has a pretty awesome self-healing back that helps resist scratches and scuffs throughout the phone's life.  The bendable nature of the display gives it a more durable nature, allowing the phone to theoretically survive a drop test better than any other since it can bend to absorb the stress of being dropped rather than the glass straight up shattering.  The G Flex can only bend a few degrees, effectively making the phone straight, but what if I told you LG was ready to one-up themselves by producing a new G Flex phone that can bend up to 90-degrees?

That's right, it seems like flexible phones are here to stay, and LG seems to be leading the pack here when it comes to the technology.  According to ZDNet Korea, LG is currently developing the successor to the LG G Flex, currently just called the G Flex 2, and should have the phone ready by Summer of 2014 if everything goes according to plan.  LG is dubbing the phone a "folding table" as the translation puts it, which suggests it's almost like a flip-phone without the hinge, and of course the ability to fully close.  The back is made of a rubber-like material that's incredibly flexible, and will likely give the phone an ultra-premium feel when it debuts.  Being able to fold the phone up to 90-degrees will virtually made it indestructible when it comes to dropping it, getting squished in pants pockets, and other unruly places that phones can't normally safely go.  LG's G Flex is already an exciting product, and while that will hopefully be available in the US sometime around the beginning of next year, LG's successor might just be the phone to buy in Fall of 2014.