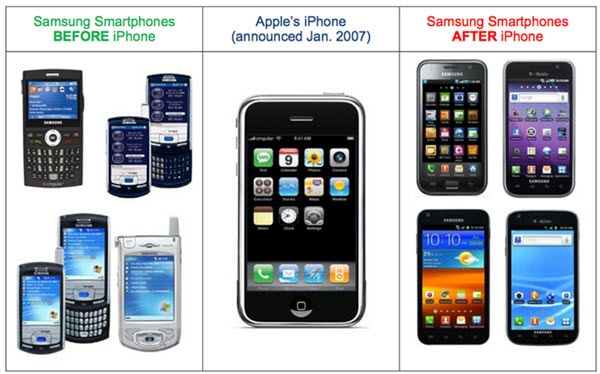 It seems like this retrial is finally coming to an end as Judge Koh rejected Samsung's plea to postpone the latest damages the courts and jury earlier said that Samsung owes Apple for patent infringement. These "patent wars" between Samsung and Apple have been in the papers for well over a year and, frankly, I cannot wait to see them end.  Apple accuses Samsung of patent infringement, then turns around, and claims that their iPad mini was not inspired by the success of the 7-inch Android tablets – after Steve Jobs bad-mouthed that size tablet and swore that Apple would never make one. Both are guilty to some extent and the illustration that Apple Insider used above shows the "before and after" when the iPhone arrived on the market and how the look of the Samsung devices changed.  Except for the rounded corners, these illustrations show the style of ALL older phones and the evolution to touchscreens and a more modern design. After all, an icon can only be so different.

Way back in August 2012, another jury had found Samsung guilty of infringing of their patents with several devices and awarded Apple over $1 billion in damages.  After more trials, testimonies, and accusations from both parties, Judge Lucy Koh determined that the jury had incorrectly determined the damages and slashed it down to under $600 million.  This current retrial is for an additional $290 million that Samsung was ordered to pay for the infringement on the "Pinch and Zoom" technology.  A Samsung witness argued that Apple was placing too high a value on that technology because people did not buy a Samsung product because of its touchscreen capabilities – it bought them because they had superior processors, a better display, and multi-tasking – and therefore the jury put too much stock in "pinch and zoom" when it determined the amount of damages.

Judge Koh felt that this had gone on long enough and for the sake of justice and expediency, it would be best if she found Samsung guilty – they were ordered to pay $290 out of a possible $380 million – and they could appeal in the Federal Circuit courts.  She wrote:

"As discussed above, Apple won a jury verdict in August 2012 in which a jury found that Samsung had infringed, among other things, various Apple patents and that Apple's patents were valid. Yet one year and three months later, due to the necessity of a retrial, Apple still has received no damages award as compensation. Further delay of relief due to a stay of this entire case pending a final decision on the '915 patent would thus substantially prejudice Apple. Samsung's arguments to the contrary are unconvincing."

So one saga ends and others will begin. Let us know in the comments or on Google+ how you feel about these "patent wars." Are you tired of hearing about them or do you like to see the two companies duking it out in court.