IDC, the International Data Corporation, is a market research firm that specializes in collecting market share data.  In this case we care most about market share of phones and trending numbers, and the newest numbers from Q3 2013 don’t disappoint.  Android continues it’s dominance of the world market by moving up to 81% of all smartphones; a 6.1% increase from the same time last year when it was at 74.9% of world market share.  Shipment volumes are even more impressive, moving from a respectable 139.9 million phones shipped in Q3 2012 to a monumental 211.6 million units sold in Q3 2013.  To say these numbers are staggering doesn’t even begin to describe the situation.  When Google said that they were poised to ship the serve the next billion people around the world with Android phones, they really weren’t kidding.  Interestingly enough there are two more patterns that are pretty cool to look at.  Apple shipped a record number of iPhones in Q3 2013, but still lost nearly 2% market share down to 12.9% worldwide because of their inability to ship a cheaper iPhone.  It’s no secret that one of Android’s strongest suits is that it’s incredibly scalable across a wide range of devices, powering anything from the strongest to the weakest phones around the world.  Android 4.4 KitKat will only help this number, as it is now able to run on device with as little as 512MB of RAM, which bodes well for the low end market.  We also see that Windows Phone has picked up the largest increase in sales, moving from 3.7 million units sold in Q3 2012 to 9.5 million units sold in Q3 2013, which gives it a hardy 3.6% market share worldwide. 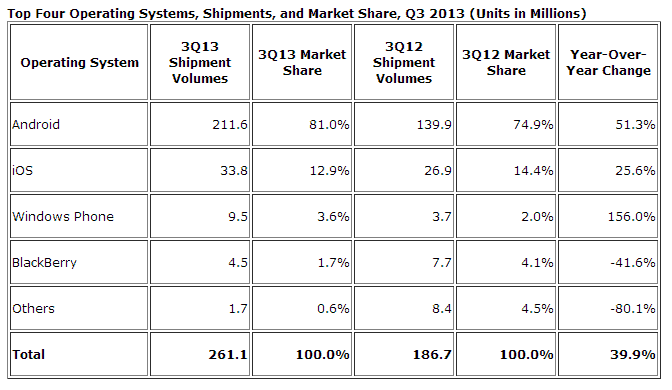 Another trend has been developing over the past year, and that’s the world’s love of Phablets.  The oft-hated term by tech enthusiasts is the best way to describe these phones, as they range from 5-inch screens all the way up to 7-inches.  Most notably is the Galaxy Note series, in which the Galaxy Note 3 has already sold 5 million units; double that of the Note II in the same time period.  This trend is building too, as IDC reports that 21% of all smartphones sold in Q3 2013 can be considered Phablets.  What’s not entirely clear here is whether or not they’re only considering screen size, as this would put the standard sized Galaxy S4, HTC One and LG G2 in the Phablet category, in which barely anyone considers them to be in.  Regardless of this we’ve seen Phablet sales go from 3% of all smartphones in Q3 2012 to a whopping 21% in Q3 2013.  Oddly enough even with the Phablet market increasing, which inherently means more high-priced phones are selling, the overall sales price of Android phones continues to drop every quarter.  Phones like the Nexus 5 and Moto G definitely help this, however, and don’t really sacrifice much to get to that desired price point. 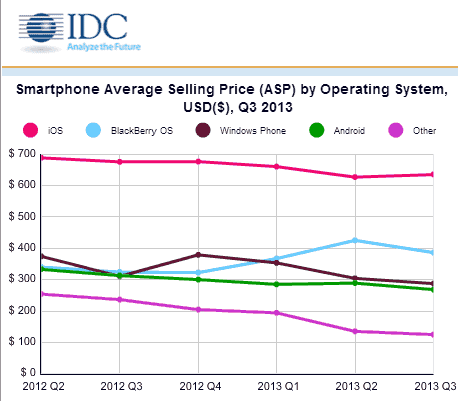 Then there’s also the trend of Samsung’s sales continuing to go through the roof.  There’s no question of Samsung’s popularity and mind share right now, and it’s resonating worldwide too.  39.9% of all Android phones shipped in Q3 2013 were Samsung devices, which compares to single digits for every other manufacturer out there.  That means that Samsung has a 30%+ market share lead on every other OEM, even though those OEMs make up 60.1% of the entire Android market.  Android’s strengths continue to build as more and more OEMs jump on board the Android train, with even companies like Gigabyte who have traditionally been in the desktop PC component market jumping on and making Android-powered phones.  Is there any ceiling for Android to ever hit?  It surely doesn’t seem to be slowing down much, and with Google launching KitKat for essentially all new phones regardless of the specs, expect the world market to continue to adopt Android phones at a record pace.