With Thanksgiving weekend getting under way in the US, HTC fans in the UK received their very own reason to be thankful today, with the Taiwanese phone manufacturer putting the HTC One Dual Sim up for pre-order. You might recall that the Dual Sim version of the HTC One has previously been on sale in China, with a red variant being sold in Japan, sadly, the rest of the world had to look on enviously and make do with the standard One handset.

The Dual Sim not only has slots for two micro Sim cards, it also has – wait for it – a MicroSD card slot. Yes, you read correctly. A MicroSD card slot. So, not only does the HTC One Dual Sim offer the same basic specifications as the standard HTC One; features such as the 1.7GHz quad-core processor, the 2GB of RAM as well as the ultra-pixel camera, it also offers the ability to use two micro Sim cards, on top of being able to add up to 64GB of additional storage to the device. Another difference is that to gain access to the MicroSD and dual Sim slots you have to proceed via the now removable rear panel. Before you get your hopes up, the Dual Sim still features a built-in battery, which is unable to be removed without resorting to a screwdriver. 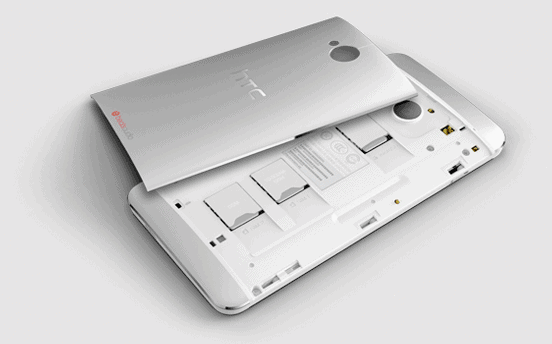 You may be asking, just what is the benefit of being able to run two Sim cards on one phone? One of the more obvious uses is for business, where being able to use two Sim cards in one device means one less device to carry. The user is able to choose a preferred network, and to personalise the name of each Sim, with the aid of the on-board Dual Network Manager, which helps to avoid any mix-ups. For example, the you might have one Sim titled ‘Home’ with the second Simlabeled ‘Office’.

As with most things in life, in order to get something, you have to give something. And the Dual Sim is no different. Whilst HTC have added MicroSD support and dual-Sim capability, they have also taken away LTE (4G) support. It’s a matter of weighing up the pro’s and con’s to decide if the Dual Sim is indeed the phone for you, it is worth noting  that LTE (4G) is still in the process of rolling out in the UK.

The HTC Dual Sim is available to pre-order here for £494 ($807), which is the same price as the single SIM HTC One, so there is no reason to forego the Dual Sim unless the lack of LTE/4G is a deal-breaker for you.

If the lack of MicroSD support was enough to push you to a different brand of handset, is the inclusion of it now enough to pull you back to HTC? Or has the release of the HTC Dual Sim come just too late? And does the release of the Dual Sim in the UK mean that the recently announced Taiwan only Desire range of smartphones will also see a wider release?

Let us know in the comments or at our Google Plus page.