Last week was a pretty busy week in Android, we had the Nexus 5 launch for just $349 from the Play Store, Android 4.4 KitKat hit the scene and a whole bunch of other stuff. However, there was one piece of news that not only shocked most of us but, didn’t quite make sense. The Galaxy Nexus, Samsung’s Nexus from 2011 will not be getting an official update to Android 4.4. That news is a little bizarre considering the track record Nexus devices have had in the past of bringing the latest Android updates before anything else and for much longer. However, the Galaxy Nexus is being put to bed a little early for some users’ tastes.

Part of Google’s reasoning is that the Galaxy Nexus falls out of their promised 18-month support window, which we’d be happy with if we were talking about a major Android release here but, KitKat is more about refining than it is about changing things. Besides, Android 4.3 runs on the device very well, so why not Android 4.4? Another reason is that Texas Instruments, the company behind the chip, has ceased to actively develop smartphone chips. As such, getting hold of all the necessary drivers and support might be a little tricky, still we’re pretty sure Google could have done it.

The community have stepped in, as they often do in these cases, and there are ROMs out there for the Galaxy Nexus with Android 4.4. These ROMs seem to work well but, there are a few graphical glitches that have yet to be ironed out. They might well be ironed out in the future but, we’re sure these will be more like “hacks” than straight fixes. No matter what though, there’s no question the Galaxy Nexus is capable of running Android 4.4, especially if it’s designed to run on lower-end devices.

Disgruntled Galaxy Nexus user Max Duckwitz, kicked off a petition to ask Google to change their minds. Since the petition started, there are now over 14,000 signatures and 3,400 comments that Mr Duckwitz has printed off and has sent to Mr Pichai in the post. What you’re seeing below is 1.3 KG of signatures and comments that should arrive at Sundar’s desk within in the next three weeks. 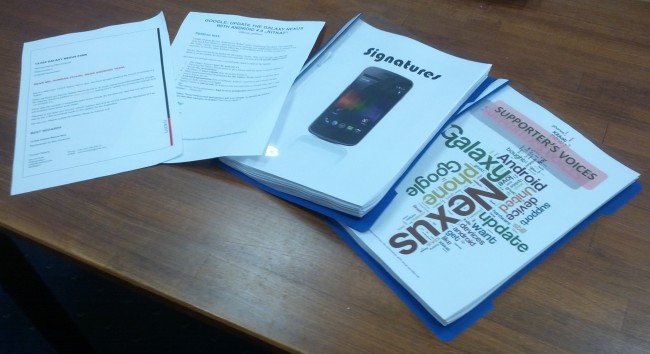 We’re sure Google have their reasons for not updating the Galaxy Nexus to Android 4.4 but realistically, this isn’t a Nexus One situation, the hardware is certainly good enough to run Android 4.4. Even more information on why such an update would be nice to see from Google but, overall what Galaxy Nexus users are looking for is an update to Android 4.4 and we can’t blame them.