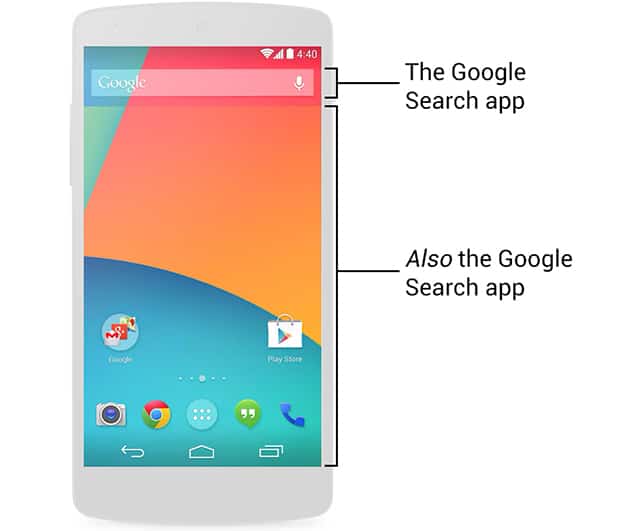 Just last week, Google unveiled KitKat, which is Android 4.4. One of the bigger updates, or features we all want to have on our existing devices, is the Google Experience launcher. It's a pretty awesome new launcher, that we had heard might hit the Play Store. What's interesting here is that the launcher is part of the Google Search app. According to Ron Amadeo from Ars Technica notes that the actual launcher AP in Android 4.4 is just a stub. What is a stub? It's an empty shell that is forwarding everything else to the Google Search app.

The Google Home.apk which we heard a lot about before the KitKat announcement does still exist. But it appears that the search app is now doing all the work. This is actually a pretty awesome thing here. This means that Google can push out updates to the launcher through the Play Store. Not just that, but through an app that already exists. It kind of makes sense since Google Now is actually part of the launcher.

So far, Google search in the Play Store is not yet updated, but there does seem to be a slight chance that it might get an update soon. Probably around the time that the Android 4.4 OTA hits the Nexus 4, 7 and 10. Hopefully Google will pull the trigger soon so we don't have to install three separate APKs to get the Google Experience launcher on our existing phones.

Throwing the Google Experience Launcher on the Play Store would be a huge deal for everyone. It means that everyone can get stock Android home screen on any device in their hand. Not to mention that Google can push updates to it without having to go through the carriers. This is the big thing. Remember all those OTAs we would get that would have plenty of bugs and even brick some functionality. With the launcher, Google can update and fix things they've broken much quicker. Sounds good right?