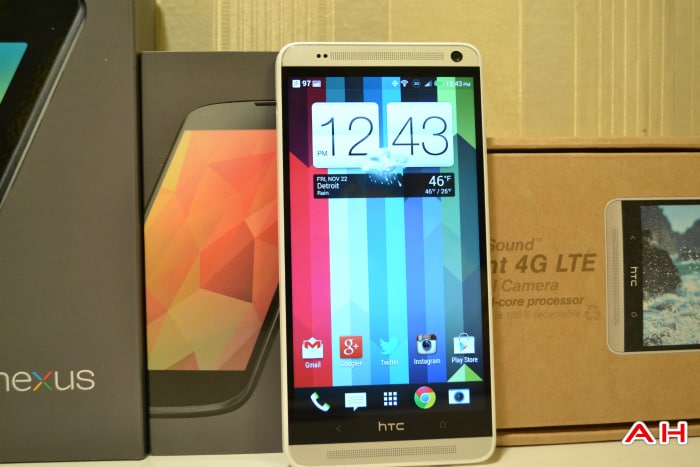 The HTC One Max was finally announced about a month ago. But to the surprise of most of us, it's only coming to Sprint and Verizon, and not even making its way into Canada. The One Max is really just a 5.9-inch version of the HTC One, even down to the specs. Many of us felt that the HTC One was one of the best phones in a long time to run Android, and we still feel that way. But does it work on a 5.9-inch device? That's the real question that we're going to try and answer in this review. The HTC One Max has a 5.9-inch 1080p Super LCD3 display along with a Snapdragon 600 processor inside and 2GB of RAM. It's also available in 16GB and 32GB models with a microSD card slot. All that is powered by a 3300mAh battery, which really lasts a long time. Now I did have the Sprint variant, so keep that in mind for the battery section further down in the review. 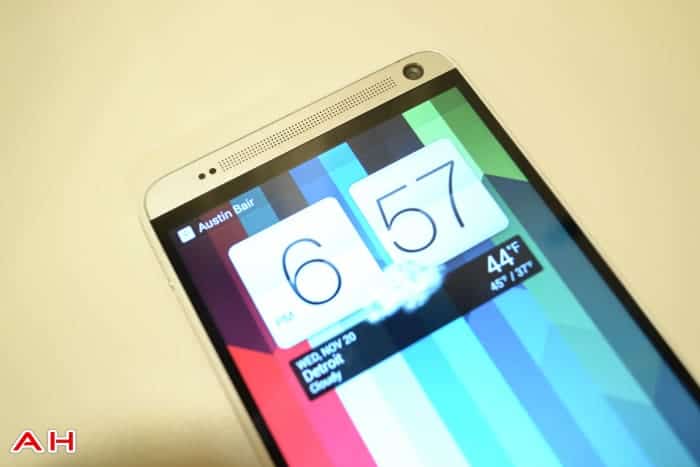 The hardware on the One Max is still great. Just as great as it was on the One. Even though it is huge, literally, it's still made of aluminum, and it is pretty heavy. The display on the One Max is a pretty amazing display. Although I've always been a big fan of HTC's displays, so I might be a bit biased there. As expected, the One Max also has Boomsound. Also as expected, it's amazing. In the video walkthrough down below, I compared the Boomsound on the One Max to the Nexus 5, and man it's loud. Now remember that the One Max does not have Beats Audio, but that doesn't seem to hurt Boomsound at all. 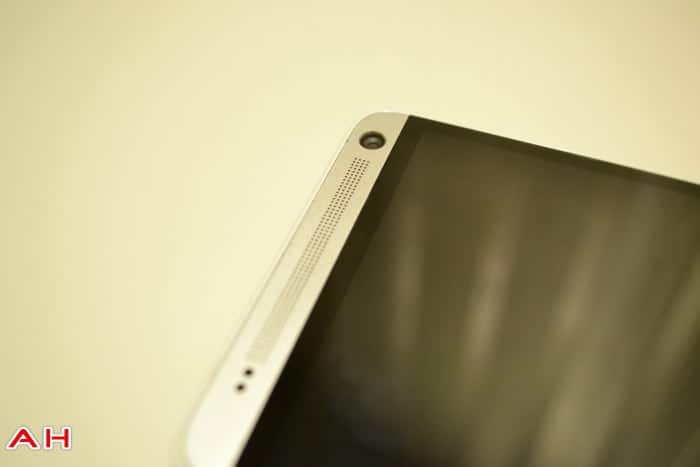 The build quality on the One Max is about what you've come to expect from HTC. It's a very high-quality device. Sure it has some plastic on the sides, similar to the One Mini, but it still feels very high end in my opinion. The back is removable, so you can get to the SIM card slot and the microSD card slot. Yes the micro SD card slot does exist on the One Max. Which is pretty surprising since HTC hasn't had one on their high-end devices in a couple of years now. Although the battery still isn't removable. 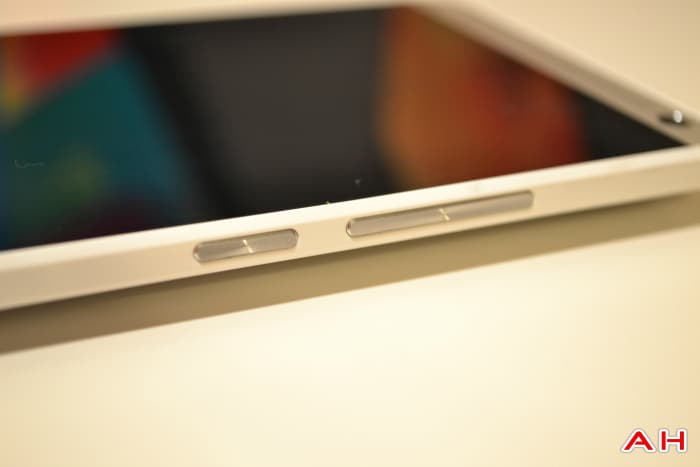 HTC has moved around the ports and buttons on the One Max, compared to other HTC devices. Because the One Max is so large, HTC has moved the volume rocker and power button to the right-hand side, and the IR blaster and headphone jack is still up top. The microUSB port is still at the bottom and the left side just has the switch to pop off the back cover. As far as connectivity goes, the HTC One Max does support HSPA+ 42mbps, LTE (Tri-band and Spark for Sprint users) WiFi 802.11 a/b/g/n/ac, Bluetooth 4.0 Low Energy, and of course NFC. 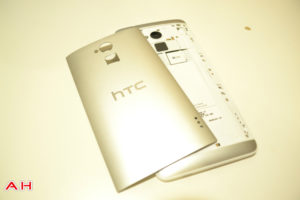 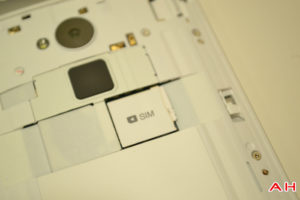 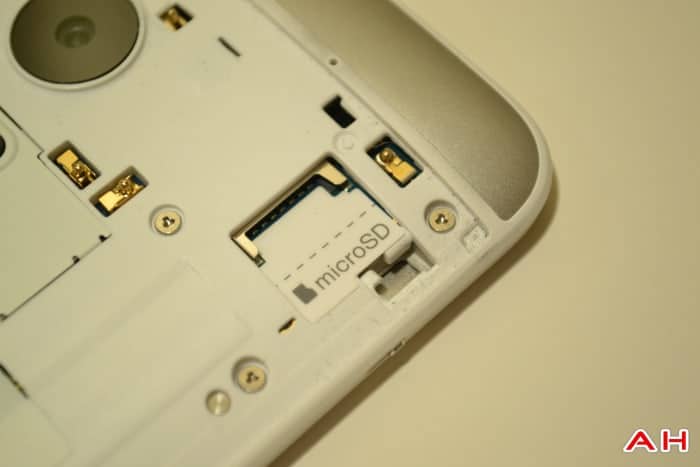 The HTC One Max is running on Android 4.3 and Sense 5.5. Of course, it's not running the latest version of Android, KitKat, but it is supposed to get updated early next year. As far as Android 4.3  goes, there's really not a lot of new stuff, that you'd notice. Android 4.3 was mostly under-the-hood fixes and stuff. But Sense 5.5 has plenty of changes. While the overall look of Sense has not really changed much, they have added in a few new features that users have asked for. One of the big things is being able to completely turn off Blinkfeed. There's also some changes to the settings app and camera app. Mostly small changes, at this point, but we'll be reviewing the entire skin further down. 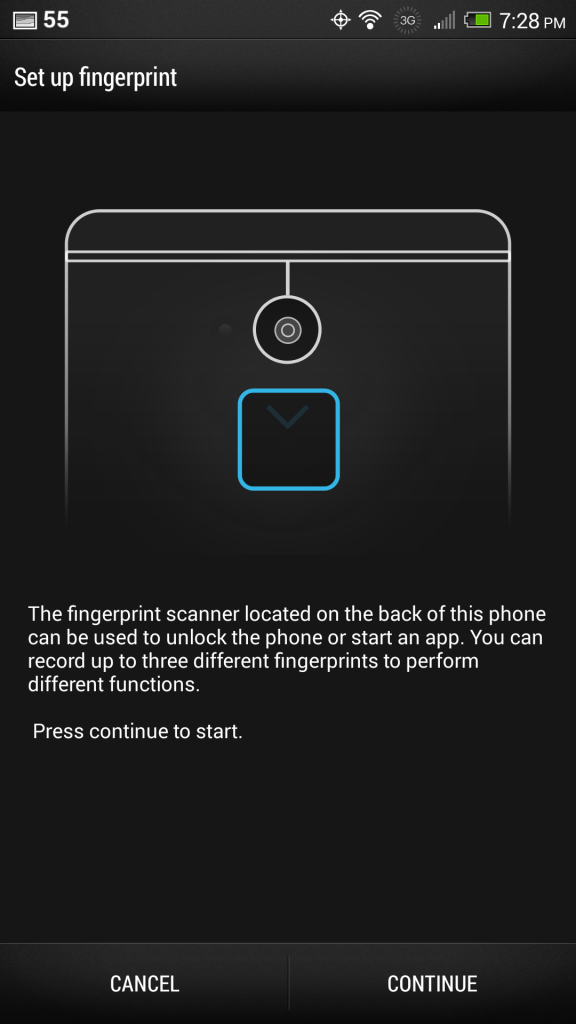 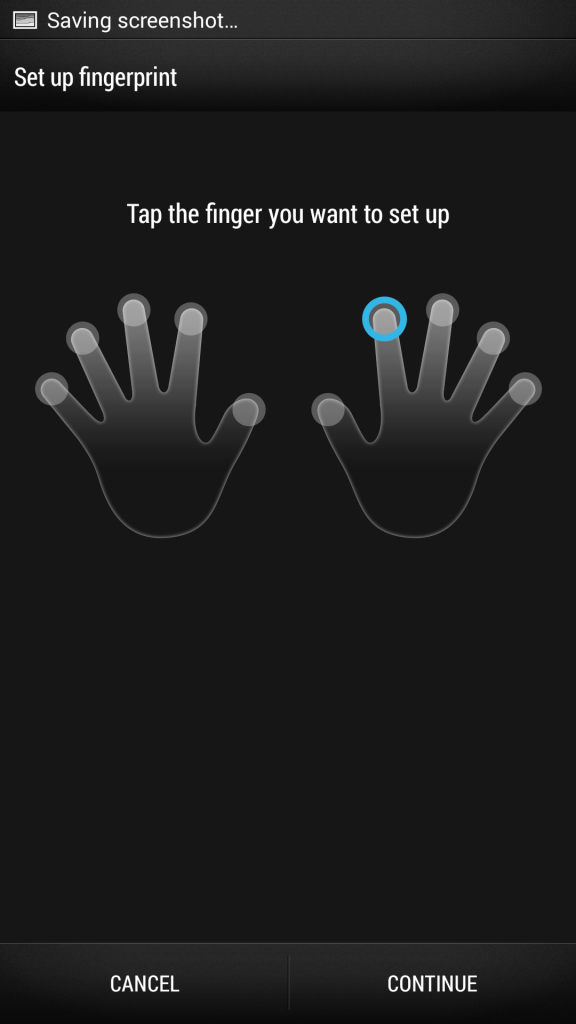 I'm actually a bit puzzled with the fingerprint scanner. I almost think they added it just because they could. It's in a pretty awkward spot, in my opinion, mostly because when I unlock my phone it's usually laying down on my desk or a table. Which if I have the fingerprint scanner working, I have to pick up my phone and swipe my finger on the scanner, which doesn't always work. Not to mention the fact that you may accidentally touch the camera. Which is going to bug a lot of people. Although you can use the Fingerprint scanner to unlock your phone, open the camera or apps. You can also set it up for each finger on each hand. Which is pretty cool. I think it needs some work and maybe better placement. But for those that want a fingerprint scanner, it's there. 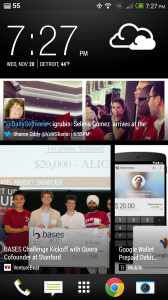 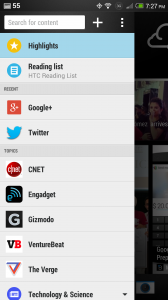 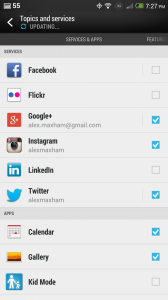 Blinkfeed has been used by other manufacturers lately. In fact some say Google used their idea in KitKat by putting Google Now as the first home screen. Blinkfeed hasn't gotten a ton of changes in Sense 5.5, but it does have the ability to be turned off, and you can also add more social media accounts now. You can add Facebook, Flickr, Google+, Instagram, LinkedIn, and Twitter. As well as using apps like the Calendar, Gallery, Kid Mode and TV. Of course you've still got the Featured Headlines from sources like Associated Press, Reuters, The Huffington Post and more. You can also subscribe to topics like Trending Topics, Automobiles, Business, Design, Entertainment and much more. As well as the ability  to add custom topics. So if you want to stay up-to-date with Android news, you could use the custom topics to add Android stuff to Blinkfeed.

Other than that, Blinkfeed is still relatively the same as it was in the One and One Mini. Which I actually like Blinkfeed, but never really use it. It is very useful, still, and it seems even more fluid than it was in the past. I can't wait to see what HTC does with Blinkfeed in the next flagship, which will probably have Sense 6. 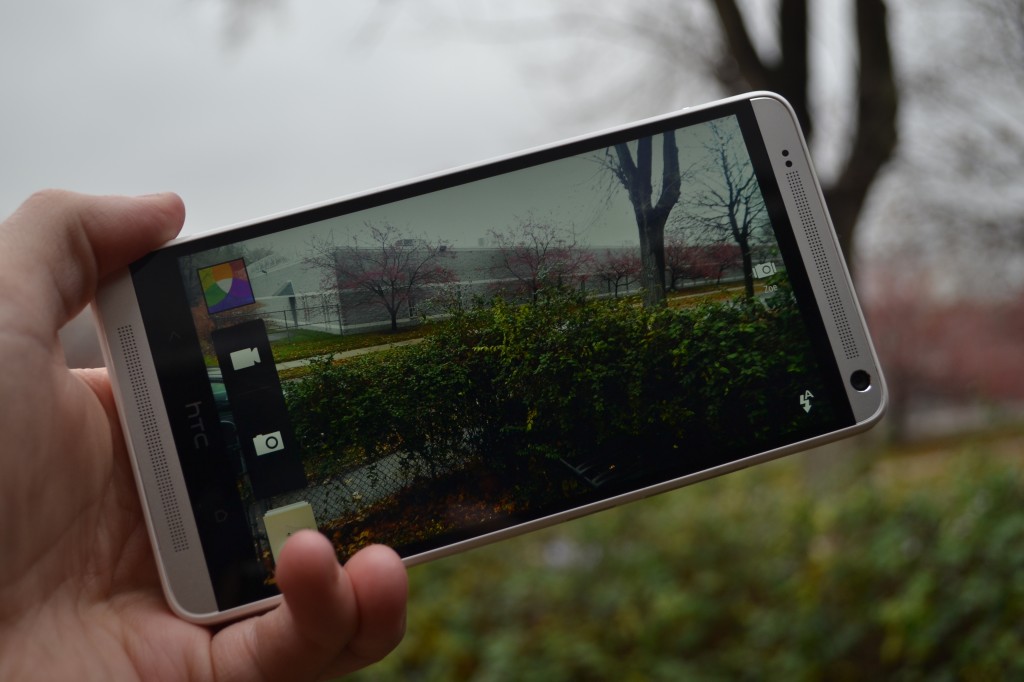 The HTC One Max camera is actually a little worse than the HTC One's camera. Why? Simply because HTC took out OIS. It's still sporting that 4MP UltraPixel camera, which means it's going to do pretty good in low-light situations, but the fact that OIS is not there. I honestly, haven't been totally impressed with the camera on the HTC One Max, but it is adequate, in my opinion. We've got plenty of pictures down below for you to check out. 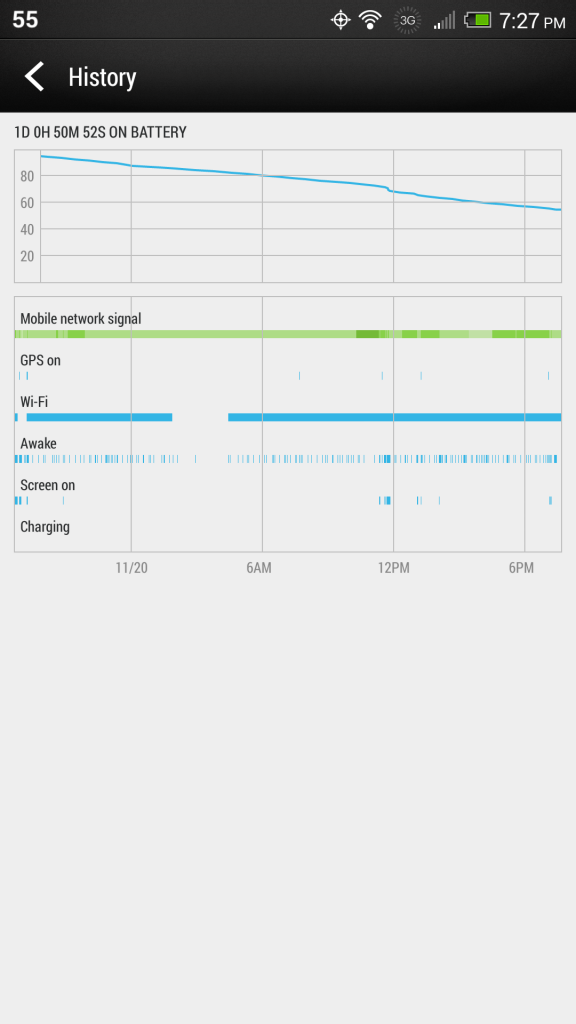 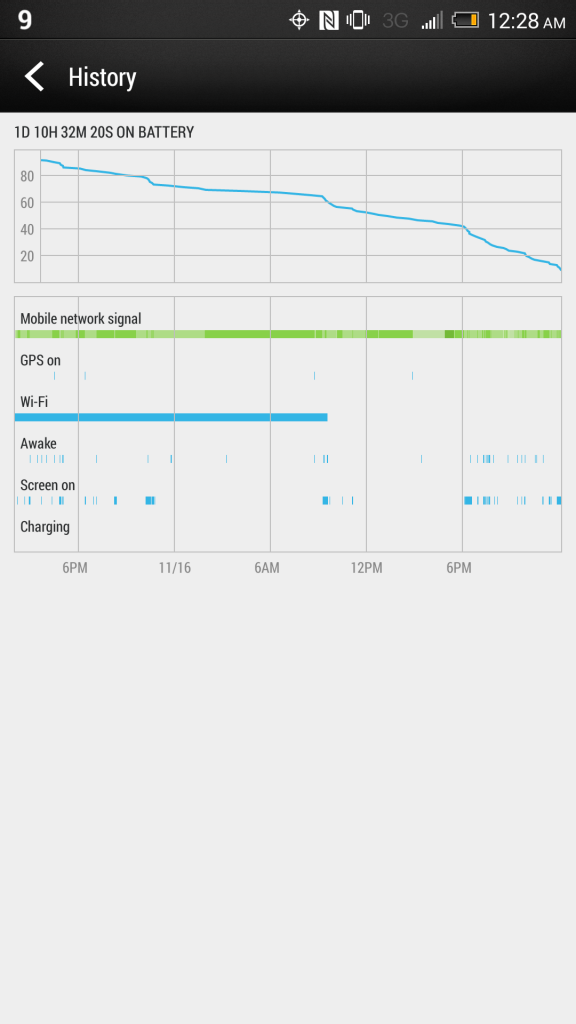 The battery life on the HTC One Max is pretty amazing. Often times, I was able to get close to two full days (that's 48 hours) of use out of this bad boy. Which is kind of expected since it is a 3300mAh battery, but then it is a 5.9-inch display. I couldn't even get that much (under my usage) on the Galaxy Note 3. So that's telling you something. Unfortunately in Sense 4+ and later, Screen on Time isn't shown in the battery stats. But above you can see a couple of my battery cycles. 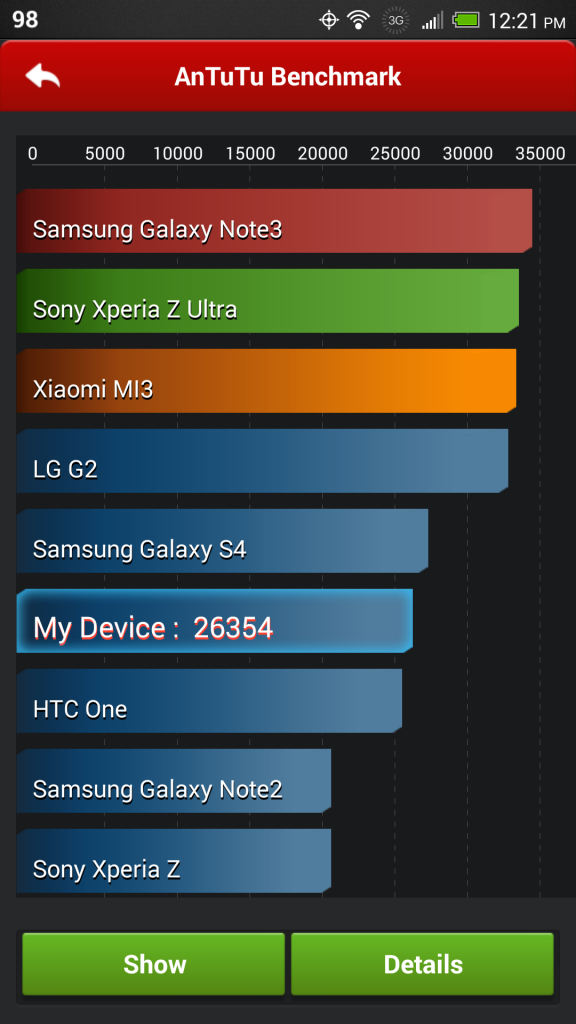 The HTC One Max is running a Snapdragon 600 with 2GB of RAM. So it's not running the latest processor, but it is running a very capable processor inside. You can see the AnTuTu benchmark above. It scored about where I figured it would, honestly.

The HTC One Max is a good device, but what keeps it from being a great device is features. The HTC One Max is simply big just to be big. In case you hadn't figured it out yet, I'm referring to the Galaxy Note 3 from Samsung. It's bigger than the Galaxy S4, but it also has a ton of features, especially for the S Pen and others that take advantage of that bigger display. The only real feature the One Max has over the One and One Mini is the Fingerprint scanner which is "meh" to me. I really wish HTC had gone in and did some work with Sense to get it to do some cool stuff with this bigger display. Maybe add something like Multi-Window, which would be amazing on this device, I think. Basically the One Max is just the HTC One stretched out to 5.9-inches. Which isn't necessarily a bad thing, but I expected more from HTC. A company that's really struggling.

If you're looking for a device that's big, and maybe don't want all the "features" Samsung throws in the Galaxy Note 3, then you're going to want to give the One Max a hard look.