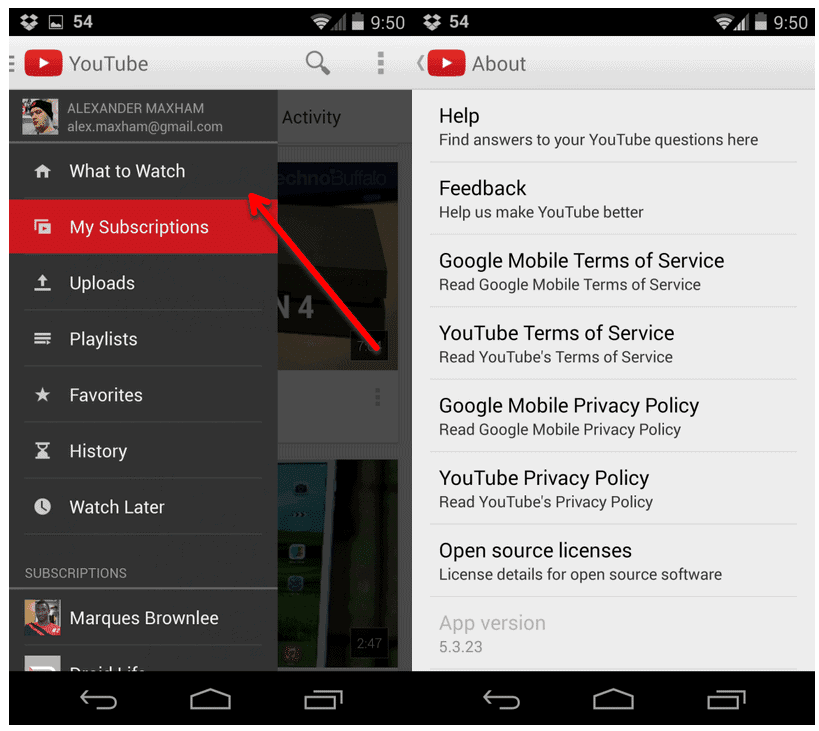 We know Google's got some big plans for their YouTube app. We've found out before that in an upcoming update, we are going to see a new feature which will allow you to listen to YouTube with the display off. Which is a huge deal for those that are going to be listening to podcasts from YouTube instead of downloading them from other apps. Making it all in one is a good idea, in my opinion. There was also word that in a future update we could be seeing a subscription music service for YouTube. Although it appears that this version of YouTube does not bring either of those new features along for the ride. It appears to be a pretty small update.

There are a few slight user interface changes in the new version of YouTube. In fact the change is so subtle that most of you probably wouldn't even notice. For example, the slide-out menu used to have Uploads, History, Favorites, Playlists, and Watch later, followed by all your subscriptions. Now Google has added "What to Watch and My Subscriptions" above those and have also mixed them up a bit. Nothing too major though.

I know, I know, you guys want the APK right now, don't cha? Well rest assured we've got the APK linked down below for you to instal. There shouldn't be any problems downloading and installing this one as it's the APK pulled directly from the Play Store. So it's signed and everything. For those that are interested the file name is com.google.android.youtube-5.3.23.apk. As always, if you find any other changes we did not mention, please be sure to let us know in the comments down below. I'm willing to bet we missed a thing or two.