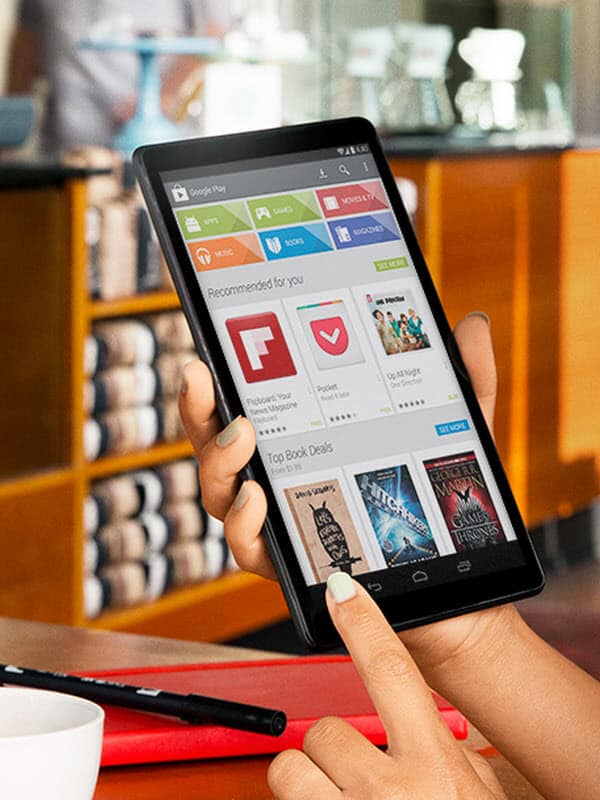 Our friends over at arstechnica.com noticed  that Google's Android.com, promotional site, has just been revamped for the launch of their Nexus 5 device and have put up new pictures and wording…but it may be that in among those pictures, Google has possibly thrown us a new clue about a Nexus 8 tablet.  If you go to the Apps & Entertainment tab, you will see that the main picture (below) shows a little girl playing with the current Nexus 7 tablet.  But if scroll down a bit, there appears to be a woman holding a new Tablet that we have never seen before, and it appears to be about an 8-incher, and it is running Android 4.4 KitKat.

You can tell it is running KitKat 4.4 from the status bar icons – it also has on-screen navigation buttons, which is common every Nexus since the Galaxy Nexus was released in late 2011.  Looking at the tablet, it is designed differently than the Nexus 7, with smaller bezels, giving it a nice compact look, possibly not much larger in size than the current Nexus 7.  Does this mean that Google may abandon the 7-inch design for a new 8-inch tablet, but with nearly the same dimensions? We have already seen the Nexus 10 tablet pop-up in the Google Play Store, ever so briefly and many expected it to be launched the same day as the Nexus 5, and were wondering if there were some problems with it – so we can be pretty sure that the 10-inch tablet will not be replaced with this much smaller version. 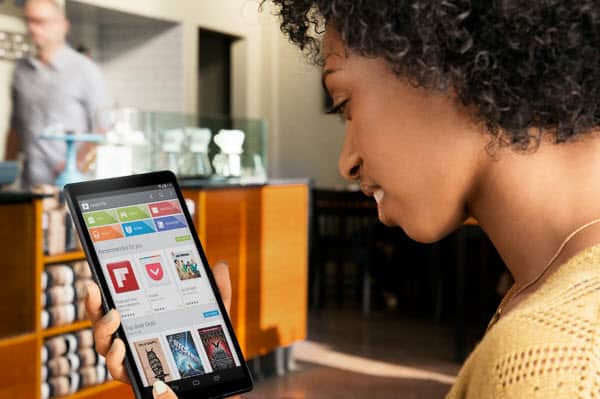 Google does not use this page to post fake pictures of devices to throw off the curious – they use it to promote and tease us and drop hints of upcoming devices.  The Nexus 5 was first spotted in a video of people taking pictures on the KitKat statue – those are the ways Google manipulates our minds and they will slide in a device or screen here or there to see how long it takes for someone to catch on.  They can be a cruel and evil bunch, those Google people, ha!

So whether this is a Nexus 8 running Android 4.4 KitKat, we will just have to wait and see.  Let us know in the comments or on Google+ if you think Google would replace the Nexus 7 with a Nexus 8.