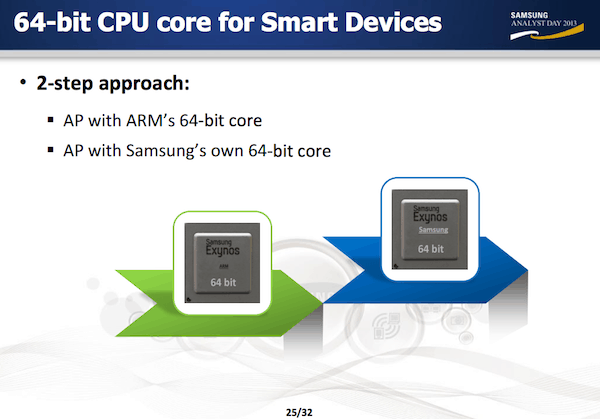 There have been some rumors earlier this year about Samsung making their own custom CPU core in 2014, and it seems that it may just be true, according to some slides from the Samsung’s analyst event. After Qualcomm, Apple and even Nvidia all have their own CPU cores based on the ARM architecture, or are preparing to launch it soon, it’s about time Samsung made one of their own, too, especially since they happen to own one of the largest chip foundries.

Right now Samsung is just making chips for others, and licensing ARM’s stock CPU core. But as Qualcomm and Apple have proven there can be a big advantage in making your own CPU core, especially if your execution is good and you can deliver it earlier than ARM’s own cores come out. With ARM now moving to the 64-bit ARMv8 architecture, it’s the perfect time to be making your own ARM CPU core, based on this new architecture.

Apple has been the first out of the gate with one, Qualcomm seems to have had some delays with theirs, and most likely won’t have it ready until the second half of 2014, and Nvidia was also supposed to ship it in 2014, but it seems it got delayed a whole year. That doesn’t necessarily mean it will be a year behind in performance or whatever other metric, especially since Nvidia plans to use TSMC’s 16nm FinFET process as soon as it’s ready in 2015, but it does mean Nvidia won’t be one of the first with a 64-bit chip out.

Nvidia will probably be the only one without a 64-bit chip next year, because Samsung has already hinted their phones will be using 64-bit chips in 2014, and they were most likely referring to their own, since Cortex A57 is not supposed to be out until the second half of 2014. 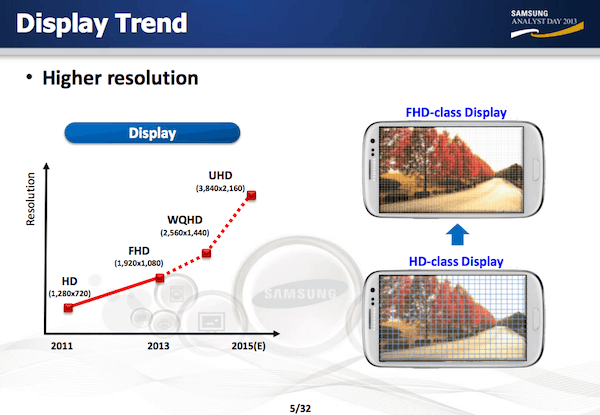 I think 1080p is already a bit overkill for smartphones today, as the only ones that seem to have decent battery life are those with batteries that are 3,000 mAh or larger, and need a lot of time to change. I’m not saying Samsung or others can’t make it so a phone with a 2014 GPU and a 2560×1440 resolution, and maybe an even larger battery, can last as much as a 1080p phone does today, but what’s the point? What’s the benefit of that for a smartphone?

Why not stay at 1080p, use a more powerful/efficient GPU, and a bigger battery, too, and strive to make smartphones with 2-3 full days of battery life?

Even if they don’t care about battery life as much, I’d rather they keep the resolution at 1080p, and focus on going a little “overkill” on cameras. That’s still an area that requires much more engineering and software development attention, and will be competitive for a long time.