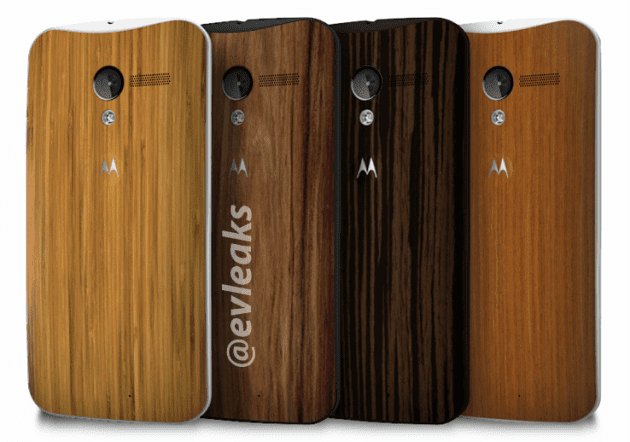 Remember those beautiful custom wood backs that Motorola was touting for the Moto X smartphone – that we have yet to see – well, when asked directly if they have been canceled, our trusty leaker, @evleaks, came out and emphatically said NO!  He promptly posted a tweet that still show the four wood backings of, Teak, Ebony, Rosewood, and Bamboo.  It certainly may have helped sales of the Moto X had they been available when the device was first announced – customers, in this field of smartphones, are quick to move on to the next "big thing" as new devices are released almost weekly…they should have struck while the iron was hot.

Choosing a wood backing for your Moto X will cost you an extra $50 according to the sample shots, but it appears you will still receive your device in the four day time frame set forth by Motorola – except for Bamboo – that seems to have a "delayed shipping" mark for that option.  This is, of course, after the "Coming Soon" label is removed from the site.

After much hype and anticipation, the Moto X was released back in August and is available on Verizon, AT&T, T-Mobile, Sprint and US Cellular. The specs are not really of a 2013 flagship device:

However, after we got our hands on the device, we were pleasantly surprised just how fast and smooth the Moto X responded. A lot of it has to do with Motorola's X8 Computing System and the fact that the Moto Blur "skin" is almost stock Android and according to Motorola the hardware and software are "optimized" for each other. Whatever Motorola and Google did, it works, and the device is a pleasure to work with.

The Motorola is able to offer this customization feature, and only in four days, because the Moto X is built right here in the U.S.A. in a new factory Motorola built in Fort Worth, Texas.  The idea of designing your own phone has been tried by other manufacturers, but the logististics were just too much to work out.  Having everything in the States makes it easier…unless you want a wooden back – but it is nice to see this will soon be worked out.

Let us know in the comments if you are waiting to order a Moto X with a wooden back, or if you already own a Moto X and would like to see Motorola offer them as an accessory that you could pop on yourself.