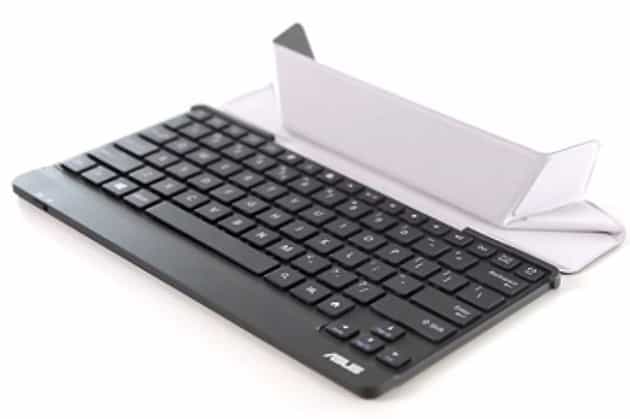 Asus has been one of the first first companies to try and integrate keyboards with tablets, and make some kind of hybrid devices that can work as both tablets and laptops, when you need them for work. They’ve tried a few ways of doing that, but so far their most popular method has been the one where there is a keyboard with a battery inside, and the tablet clicks at the top.

Today they’re unveiling something that I think is pretty interesting, because it combines a keyboard, a cover, and a docking station – all in one. The invention is called the “TransKeyboard”. Unfortunately, the keyboard uses only Bluetooth 3.0, which I’m sure will work just fine, but it’s strange to still see anything less than Bluetooth 4.0 this late into 2013. I would’ve thought that by now all new devices will be using Bluetooth 4.0 or Bluetooth 4.0 LE.

I like that the TransKeyboard can work with any tablet from 7″ to 10″, by folding its cover on the back, and you can use it just as you would a laptop. However, it’s not very clear whether that cover also protects the tablet, so you can put the tablet inside, and carry it all around. Instead, it looks like you’ll have to keep the tablet completely separated until you’re using the keyboard. So basically, the cover is only for the keyboard alone.

That doesn’t make a whole lot of sense to me, as then it’s not that different from the previous keyboard, other than the fact that it doesn’t look like it will have a battery inside, which I’m fine with, as long as it costs about half as much, and is much lighter. I would’ve preferred if you could stick the tablet inside, so you can actually protect the tablet, like some other keyboard cases work, too. From that point of view, it looks like for now Logitech’s Folio 2 keyboard case is still the better option, as it lets you do everything the TransKeyboard does, while also keeping the tablet inside, like a hybrid or laptop.

You can see how Asus’s new TransKeyboard works in the video below: