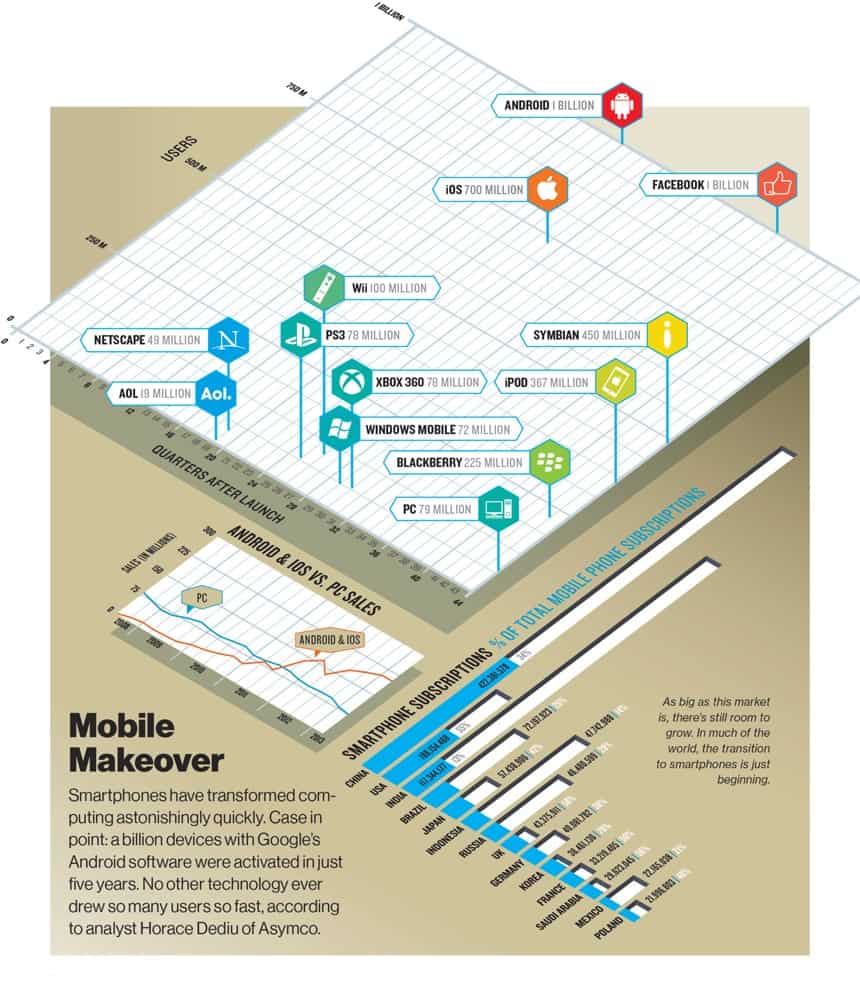 Android has just reached 1 billion activations since its release 5 years ago, which makes it the fastest growing platform ever, even faster than Facebook. It used to be that iOS had the fastest growth and the biggest user base early on, but now Android has much higher growth worldwide, with quarterly sales at about 80 percent of the smartphone market, but it also has an almost 50 percent bigger user base than iOS now, which only has 700 million.

Since Android’s sales growth are so much bigger, that difference will only become bigger as time passes, and it probably won’t be longer than a year, when Android will have twice the user base of iOS, and eventually 3 times more, with Android’s total user base somewhere around 3-4 billion, in 2016-2017.

If we were to take a snapshot in time of Google’s growth right now, which is about 1.5 million activations per day, we could say Android will gain 500 million users every year, which would still help it reach 3 billion by the end of 2017. But that’s if we really assume that Android’s growth rate will stagnate, and will only grow at a rate of 1.5 million users per day for the next 4 years.

That seems unlikely – it’s actually going to keep growing. Why? Because the smartphone market hasn’t found a hard limit yet. It’s not, say, 1.5 billion users in total. The potential is up to 5 billion, which is the amount of total phone subscriptions right now. That includes feature phones, too, which smartphones will undoubtedly replace completely, given enough time, especially now that KitKat works so well on low-end devices, and should easily help it reach the next billion users. So if Android maintains its 80 percent market share, and we assume a total smartphone market of 5 billion, that’s 4 billion Android phones.

That may seem optimistic, but earlier, when I counted the total iOS user base, I also included the tablet market, too. In the future, there’s no reason why there wouldn’t be at least a billion Android tablets, as at least 20 percent of those people should have tablets, too, possibly many more.

Either way, Android is looking at 4, if not 5, billion users by the end of this decade. At that point, there will be doubt about which platform is the main platform not just for consumers, but also for developers.