Although .7-inches larger than the Nexus 5, the Samsung Galaxy Note 3 is still a possible rival purchase – many users deciding whether they want the larger phone or the 5-inch variety. Besides, like we have previously stated, these comparisons are strictly – well mostly – based purely on a comparison of the two devices, although, this particular comparison is one of those that fall into that “well mostly” category. Other than the excellent processor, the Qualcomm Snapdragon 800 Quad-Core running at 2.3GHz, these two phones have very different specifications, most “notably” (pun intended) the screen size, with the Galaxy Note 3 measuring in at 5.7-inches and the Nexus 5 at 4.96, or 5-inches.  The Nexus 5 is just at the beginning of what the technical world has dubbed, the phablet, while the Galaxy Note 3, defines, in the purest sense, the phablet category. 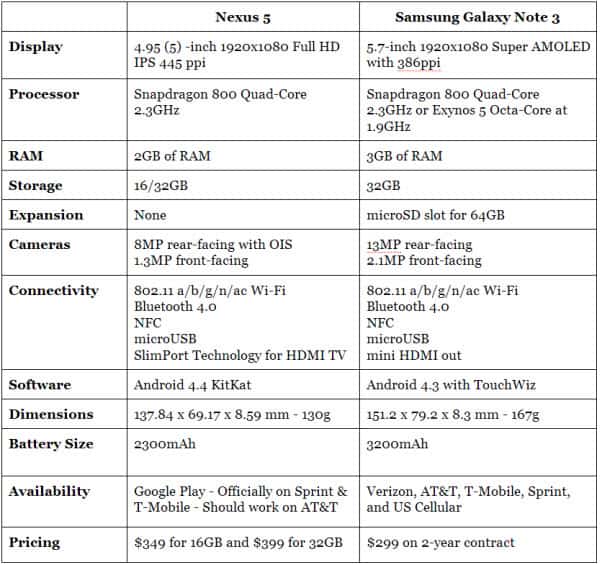 Released less than a week ago, the Nexus 5 is the latest in a line of Google’s pure Android devices; the way Google wants the user to experience their Android operating system, with the latest being released – Android 4.4 KitKat.  Although not designed to be the pinnacle of the current day’s technology, the Nexus 5 is nevertheless, quite a competitor with todays’ current smartphones.  The processor and speed are certainly current technology, the screen is Full HD with 445 ppi, 2GB RAM, 16/32GB internal storage (although no microSD slot), has all the necessary ports and connectivity (except Verizon), and, most importantly, Android 4.4KitKat – which has all of Google’s latest technology. From all accounts, the Nexus 5 is fast and smooth, with no “skin” like TouchWiz, slowing it down. 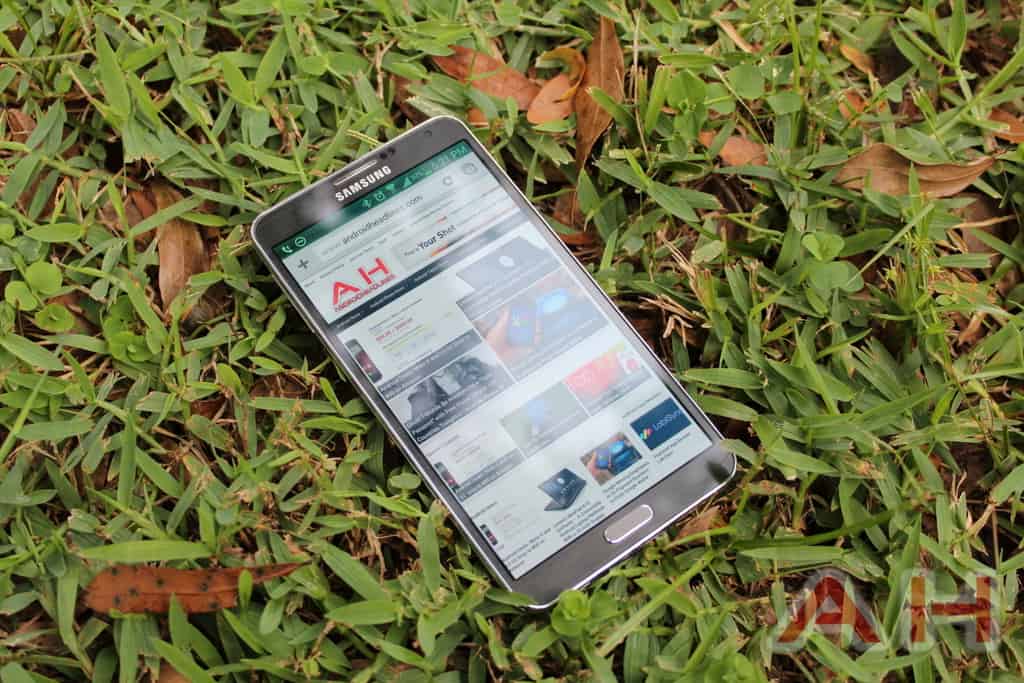 Samsung’s latest flagship, the Galaxy Note 3 was just released the first of October, and has had excellent reviews. It is the device that defined the phablet category and this latest rendition is the best Note device that Samsung has produced. Even though is is hampered by an outdated TouchWiz, the 3GBs of RAM really help it perform smoothly and quickly – when I say “outdated,” I am referring to the fact that the build of it is still largely based on older versions of Android and really needs a complete overhaul in order to run faster and smoother. Speaking of software, the Galaxy Note 3 was the first device to come with Android 4.3 Jelly Bean out-of-the box, and Samsung has done a great job of incorporating software that takes full advantage of it stylus, or S-Pen, making the device a true phone/tablet combination. The large, Full HD Display, is excellent for watching videos or movies, gaming, drawing, working with photos, or simply reading. The camera specs also get the nod here, although Samsung has still not supply an Optical Image Stabilization (OIS) system on the Galaxy Note 3, as was done on the Nexus 5.

…And the Winner is… a Draw 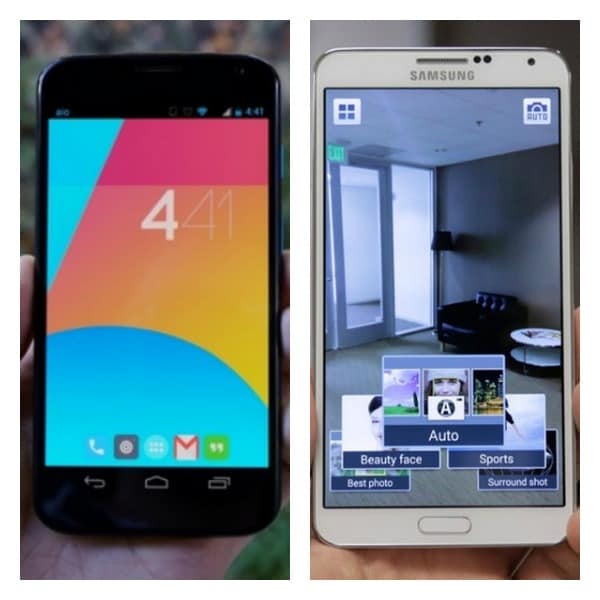 I had to call this match up, a draw – like I said in the first paragraph, this is a review that falls into the “well mostly” category.  Going strictly by specifications and features, you would have to give the nod to the Galaxy Note 3 – but when you are comparing it to the Nexus 5, you have to take into account the pureness of Android 4.4 KitKat and the audience that purchases these two devices…totally different. While the Galaxy Note 3 is far from a mainstream phone, 4o million people have purchased one of the Note series devices. The Nexus line sells in far lower amounts, but its fan-base is every bit (or even more) adamant about their love of the device. So even though the Galaxy Note 3 has better specs in a few areas, these two devices are both top selections in their field for their respective audiences.

Let us know in the comments or on Google+ what you think about these two great devices and which one, if either, you will be getting.