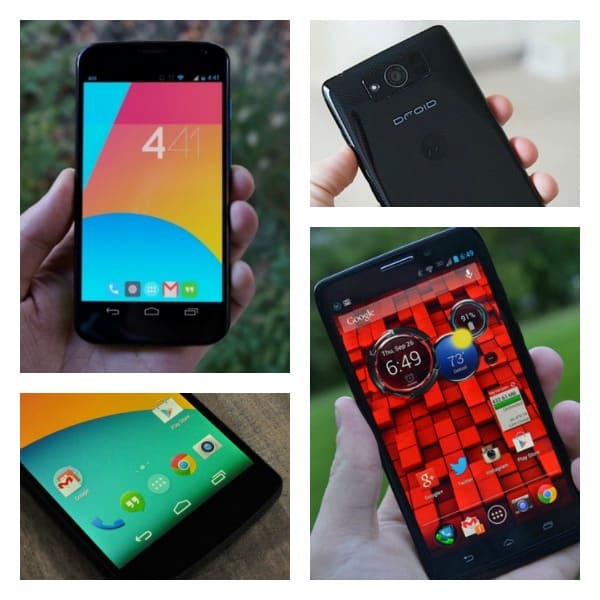 With the Nexus 5 finally released this past week, we will begin doing phone comparisons with it and just about any other device currently on the market.  No, we do not yet have a Nexus 5 for a hands-on test, however, these comparisons are based on specifications.  With the Nexus 5 and Droid Ultra we have two phones that are approximately the same size, with the Droid Ultra slightly thinner, but then that is what the Droid Ultra is all about.  They both have 2GB of RAM, 16GB of basic internal storage, although the Nexus 5 does have a 32GB option.  Neither device has any room for a microSD card for added expansion.  They both have similar size batteries weighing in at 2300mAh for the Nexus 5 and a 2130mAh in the Droid Ultra. Now let's take a look at each individual device and discuss what sets them apart from each other. 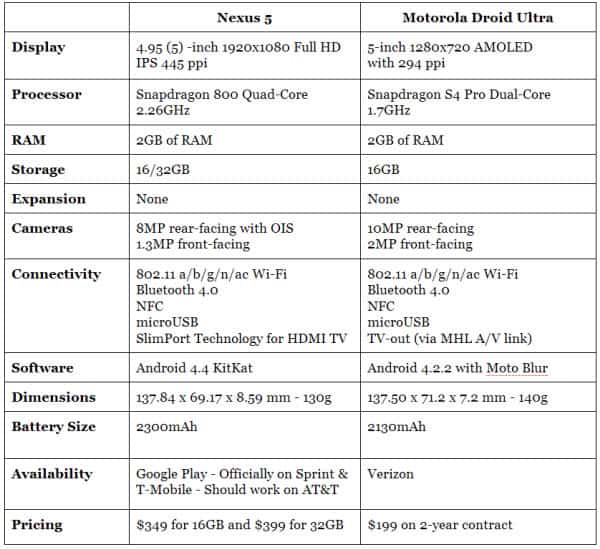 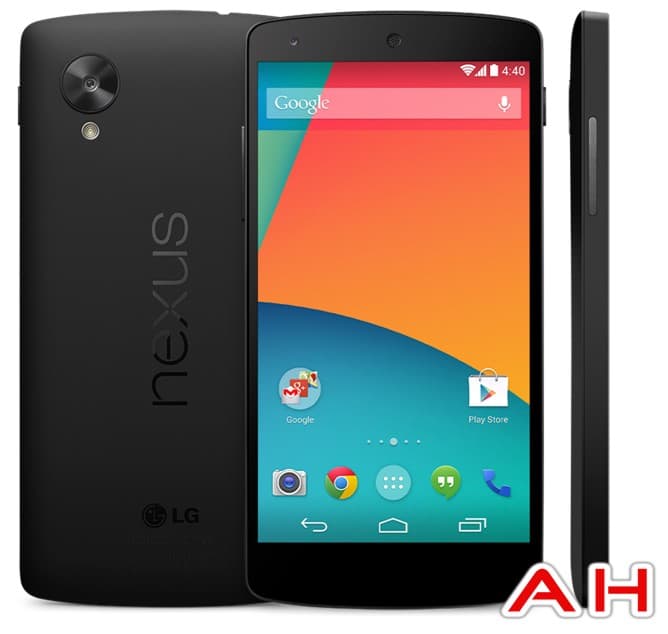 Google's newest smartphone, the Nexus 5 is made by LG and fashioned somewhat after their successful LG G2. The Nexus series of smartphones, though made by different manufacturers, are overseen by Google and are not designed to be the highest spec smartphone made – they are designed to showcase Google's Android OS in its purest form, with no TouchWiz, Moto Blur, or Optimus UI to clutter Android, the way Google designed it.  The Nexus 5 uses the newest Android 4.4 KitKat and it will received the updates before any other device.

This Nexus 5 is no slouch in the specifications department with the Qualcomm Snapdragon 800 Quad-Core processor and 2GB of RAM.  It also spots a Full HD 1920 x 1080 resolution display with 445ppi, and if the camera works as well as the LG G2's, then that will also be a strong spot, even though the 8PM is lower than many of the newest cameras on other phones.  One of its greatest assets is its price – $349 for the 16GB model and only $399 for the 32GB model – and those are not contract prices. 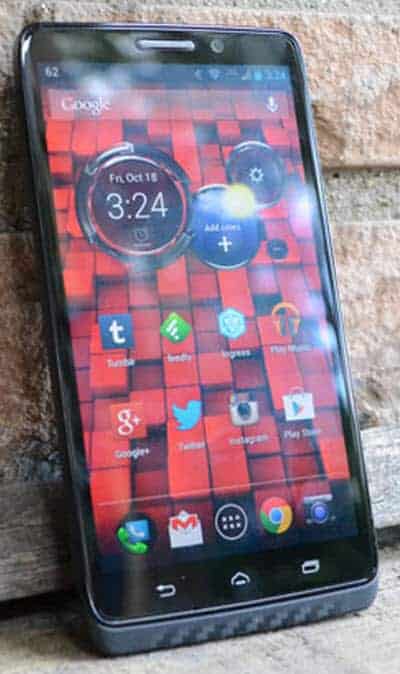 While the Motorola Droid Ultra may run almost pure Android, it is a different kind of phone from the Nexus 5 – where the Nexus 5 is more for an "exclusive" club of diehard Android lovers, the Droid Ultra is designed for the masses.  It is a comfortable size for most, but has mediocre specs, using a Snapdragon S4 Pro Dual-Core processor clocked at only 1.7GHz.  It's screen is also "last year," at only 720p rather than 1080p, but somehow it all works. Motorola has optimized their hardware and software to run quickly and smoothly, more so than the specs would lead you to believe.  It's camera is 10MP, and is fine for taking a quick picture for Facebook or Instagram, etc…in other words do not sell your DSLR!

Better screen, better processor, Android 4.4 KitKat, and a terrific price, puts the new Nexus 5 on top of this comparison. Motorola went with the 720p screens on their two Droid Models, as well as the Snapdragon processor from last year – but thoroughly optimized to run fast and smooth. Motorola, now owned by Google, use a "thin skin" over Android, but are still using Android 4.2. While a great phone, the Droid Ultra just does not stack up to the Nexus 5.

Let us know what you think about the Nexus 5 and the Droid Ultra in the comments or on Google+.