Google’s Chrome browser has grown in popularity from a relatively obscure open-source project on Google’s part, to a browser that’s being used by anywhere from 32-46% of Internet users depending on what country you’re in.  That’s at least 10% more than any other browser out there, even the old failsafe Internet Explorer that once ruled the high seas of the Internet kingdom.  Google’s impressive leap to the lead is for a number of reasons, all of which include better security, web apps, great user interface design and just a faster browser experience.  Google took this browser expertise to Android when it launched Chrome on Android in the summer of 2012, and it brought much joy to lots of Android users worldwide.  Much like the desktop version of Chrome, the Android version quickly became synonymous with web browser on Google’s mobile platform, and now it looks like Google will finally be replacing that old stock Android browser with Chrome as part of the Google Apps license.  UnwiredView found a couple of tweets by Android developer Maximiliano Firtman that confirm this:

For those who are unaware of how Android is licensed, essentially the operating system is free to use by anyone, including companies like HTC and Samsung, but companies have to license Google’s apps if they want to ship them with the latest device.  Since Google is taking away the stock Android browser with Android 4.4 KitKat, that means that Android doesn’t actually ship with any kind of browser at all if it isn’t licensed.  This will force OEMs to make their own browser or continue to license Chrome as they have in the past, and it’s a mixed bag as to what this is going to do.  Initially it seems like most OEMs will just license Chrome and not bother with making their own browsers, but what about companies like Samsung and HTC that have already built their own browsers?  Samsung has been shipping their phones with both the Samsung browser and Chrome installed for a little while now, and while this creates confusion for some users, it ultimately gives more people a choice. 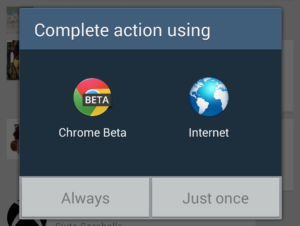 Many will pick Chrome over the stock “Browser” simply on name alone, and in my personal opinion that’s a very good thing.  Samsung’s Browser, like much of their user interface, is archaic and not well designed (i.e. it looks like Apple’s browser on the iPhone).  Chrome represents a new generation of browser design that’s fast, fluid and easy to use, and most of all it’s incredibly simple to manage multiple tabs.  Google has also been building a lot of security measures into Chrome lately, and this move is also likely part of them trying to take Android back from OEM control.  While a lot of things things are more for the desktop version of the browser, like banning external extensions, it trickles down to the mobile version since they’re built on the same base.  Let’s just hope this doesn’t backfire on Google and end up giving the OEMs more control instead of less.