No matter what you think about Samsung products, nobody can deny that their update support has been better than pretty much any other OEM for the last couple of years now. While HTC, Motorola and others simply say goodbye to older products, Samsung keeps on updating them. Last year's Galaxy S III was launched with Android 4.0.3 and was subsequently updated to Android 4.1 Jelly Bean and while Android 4.2 has seemed to have been skipped, Samsung is finally giving users a new version of Android, this time around it's 4.3 Jelly Bean, as SamMobile is reporting, and it has some extra goodies in-store, too. Galaxy Gear support is one of the big additions here, allowing you to go out and buy a Galaxy Gear to connect to your Galaxy S III.

Right now, the update is apparently hitting GT-I9300 models in Europe so, you should hold tight to see when the update arrives for you. Once the ball gets rolling though, the wait shouldn't be too long. There's no word on a US-release just yet but, we don't see Samsung being too far behind there either. Of course, the update to Android 4.3 brings with it a number of features under the hood but, Samsung is bringing a lot to their 2012 flagship. Take a look at some of the changes below: 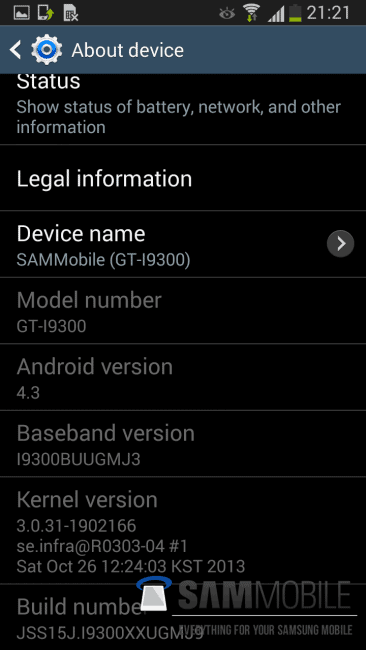 Overall, this should bring the Galaxy S III more in line with the Galaxy S4 and users looking to get their hands on the Galaxy Gear can now do so using their Galaxy S III. It's great to see Samsung moving forward with updates like this and hopefully, the Galaxy S III sees KitKat but, we're not holding our breath for such a thing.