Why must we feel that when we drive a two-ton vehicle down the road that we must be doing something other than driving? In the “olden days,” without power steering, power brakes, power seats, powered mirrors, powered windows, cruise control, and automatic transmissions, driving was about all you could do – your feet and hands were so occupied operating the vehicle, there was little time for anything else. Even if there had been cellphones back then, figuring out the logistics would be too daunting of a task.

But now we have power everything, so much so, we barely have to drive the car by guiding it with barely one finger on the wheel, or the ever popular lap driving (not to be confused with lap dancing) where you press your legs against the steering wheel to hold the car in a certain direction while you use your hands for something else besides steering the wheel – on second thought, I guess there is a lot of squirming around!

With the advent of one of the greatest inventions a techie could ever want – the smartphone – driving has become more dangerous than ever as many people try and text while they are driving, when most people, at least by my observations, cannot even talk and drive safely…they seem to think that because they are talking on the phone, there is no need to stop or pay attention to the other drivers as that seems to have turned into our job to watch out for them. “Hey, can’t you see I’m talking here? Please watch where I am going!”

To combat our never ending desire to play with our smartphone while we are driving, developers are trying to come up with “safe” games you can play while driving your vehicle. Is this really possible to turn your vehicle into a two-ton “gaming console?”

According to readwrite, Paul English, the co-founder of Kayak (popular travel aggregation website) thinks it is possible. This need was brought on by the fact that English has two “media-obsessed” teenagers and his concern for their safety, inspired him to develop “Road Wars.” This iPhone game is intended to discourage driver distractions and not to spy on drivers and report back bad road behavior like Textlimit. English says:

I find those apps creepy. They’re certainly not something that teenagers would be excited about. I’m coming at it from another angle. Can I make something fun?

With Road Wars, you must sign into Facebook account and you earn flags for driving safely – no speeding, swerving, or picking up your phone – English believes that teenagers will want to brag about their high scores and how many neighborhoods they were able to capture. The app uses the phone’s accelerometer to determine speeding and swerving, but the readwrite tester found several problems with its accuracy and scoring – and the fact that he could not keep his eyes off the colorful play graphics! 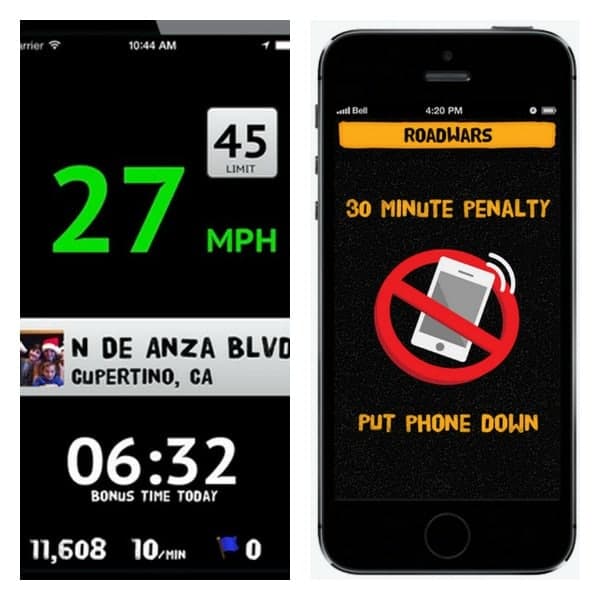 Another attempt at making driving fun while not using your smartphone is an Android app called, Volkswagen SmileDrive, developed, you guest it, by Volkswagen. It’s the first full-blown “gamification” app from an automobile manufacturer – Volkswagen collaborated with Google to create the app. You pair your phone and vehicle via Bluetooth and the Android app uses Google+ logins to share your driving expedition by location, distance, time, and weather, with a special Volkswagen webpage. So it basically records your trip and gives you a summary at the end and awards you Stickers or Punches if you unlock achievements. As one reviewer wrote:

Pointless but fun! I’m still waiting for my first punch, but otherwise it’s interesting to have a little chronicle of life’s mediocrity. 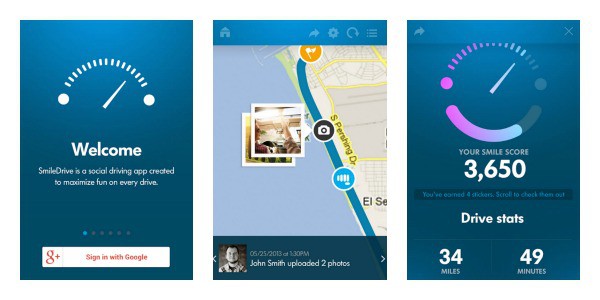 I do not know about you, but it sounds like these “safe” games you can play on your smartphone while driving, may do one of three things – drive me to text/talk on my device, put me to sleep, or drive me to drink – which is what we are trying to get away from in the first place. It seems like people that feel such a compulsion to use their smartphone while driving need to simply STOP doing it. Today, the smartphone in our hands is like breathing, we do it without even thinking about it, or the consequences of what might happen when we take of eyes off the road for a split second. My advice is to pullover if you really have to text somebody or place a phone call, or at the very least, get yourself a good set of earbuds so you can speak handsfree. Put those hands on the wheel, 10 and 2 (remember that) where they belong; the ride itself can be bumpy enough.

Please let us know in the comments or on Google+ how you feel about using your smartphone while you drive – do it all the time – never touch your device while driving – what do you normally do if you use your device – text, talk, play games, or all of the above.