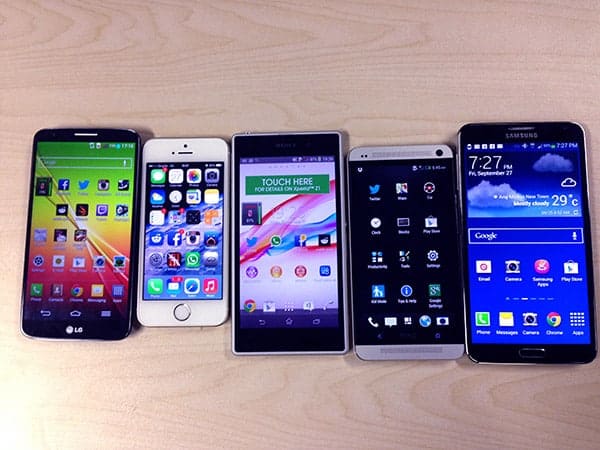 Counterpoint, a Technology Market Research Group, listed the top smartphone manufacturers, based on sales during the third quarter of 2013.  There were no real surprises, other than Nokia coming in at number four, edging out Motorola, although I think by the end of the year we may see the fourth and fifth spots change again – there is fierce competition after you get by the top three.  We are going to list them for you from tenth place to first place and list each manufacturer's current, premier phone and a few specs. 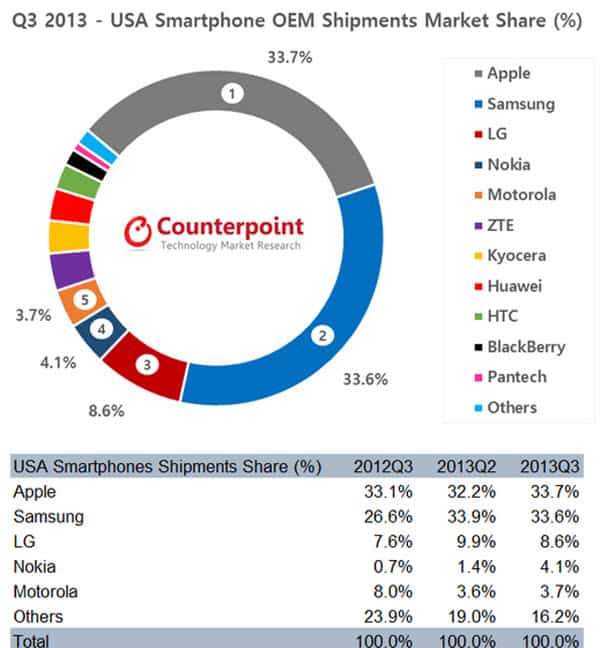 It is sad, but true, that BlackBerry is in a downward spiral, but they still captured 10th place in smartphones sold in the U.S., and they managed to announce a new phone, the Z30 – the largest screened BlackBerry ever made.  It sports a 5-inch 1280 x 720 display with 295 ppi, with a Qualcomm Dual-Core MSM8960T Pro processor running at 1.7GHz, 2GB RAM, 16GB internal storage, and a microSD card.  It has a 2880mAh battery, 8MP camera, 2MP FFC, and comes with Wi-Fi, Bluetooth 4.0, GPS, and NFC.

The HTC One Max is a beast of a phone, if not in specs, in pure size – sporting a 5.9-inch Full HD Screen, but only using a Snapdragon 660 Quad-Core processor clocked at 1.7GHz.  It does have 2GB of RAM, 16/32GB of storage with a microSD slot to add additional storage.  It does come with HTC's 4MP UltraPixel camera and a 2.1MP FFC, Android 4.3 Jelly Bean, a fingerprint scanner, and a 3300mAh battery.

Huawei's Ascend P6 comes with a 4.7-inch 720×1280 (312 ppi) LCD display, an in-house K3V2E Quad-Core Processor running at 1.5GHz, 2000mAh non-removable battery, 8MP camera, 5MP FFC, and a stunning all glass display, metal trim and an all metal back plate.  It does come up short in terms of radios – only sporting HSPA+21, with a variety of bands, so if you are on a GSM network, you should be okay.

The Moto X is the first device from the joint Google/Motorola effort and it was at first criticized for its lack of specs, however, that all changed after the Moto X was actually tested and reviewed.  It has a 4.7-inch screen, but only 720p resolution.  It is using only a Snapdragon S4 Pro Dual-Core Processor clocked at 1.7GHz (Motorola X8), 2GB of RAM, 16/32GB of Internal Storage with no microSD slot, a 10MP camera and 2MP FFC, a 2200mAh battery, and Android 4.2.2 running almost in pure form.  Google and Motorola worked to optimize the hardware and software to the point that it runs fast and smooth and even battery life is deceit.

The Galaxy Note 3 is both a phablet and flagship in every sense of the word – 5.7-inch Full HD screen, Snapdragon 800 Quad-Core Processor running at 2.3GHz, 3GB of RAM, 32GB of Internal Storage with a microSD slot for added storage, a built-in S-Pen and loads of software to accompany it. It was the first device to ship with Android 4.3 Jelly Bean.

Apple and Samsung continue to battle for top spot, and Apple picked up a little in the third quarter with the launch of their new iPhone 5S, as well as selling a lot of older models at reduced pricing.  Motorola and Nokia will continue to battle in the fourth and fifth spots and it will be interesting to see how Nokia sells as they become a full-fledged Microsoft owned brand and Motorola, now owned and operating under Google.  What phone do you have or what company is your favorite – let us know in the comments or on Google+.