With the holidays just around the corner, most of you are likely getting ready to venture into your local shopping malls in order to snag some great deals on gifts for their loved ones. I love a Black Friday Sale as much as the next person however the biggest value may lie in the newly released Nexus 5. The Nexus 5 makes a great gift and here is why;

This is a huge bonus for people who like to travel or bounce from Carrier to Carrier. In the past, people would purchase pre-paid “burner phones” while they are overseas but this is a thing of the past. The Nexus 5 will work with any pre-paid SIM card or if they have T-Mobile, it will just work in the 100 countries they support.  Furthermore, It does not matter what mobile carrier the person is on; the Nexus 5 will work with them all.

The Nexus 5 is one of the easiest phones to use on the market and is often welcomed by those who are switching from another platform. The interface is smooth and very intuitive. All of the settings can be accessed via a simple swipe down gesture and all applications can be found in Android’s App drawer.

Speaking of switching platforms, if you are an iOS user, Google’s Eric Schmidt has put together a great guide to help you make the move to Android.

Unlike the Nexus 4, the Nexus 5 supports LTE across most carrier bands. It does not matter if you have T-Mobile, AT&T or Sprint, you should have no problems jumping onto their LTE Networks and enjoy blazing fast speeds.

One of the issues with buying a new Android Phone is that many manufacturers and carriers love to load up Android phones with an unhealthy amount of unnecessary bloatware, some of which cannot be uninstalled. Aside from several of the applications being useless and redundant, the bloatware can take up precious space on your device. In the case of the Verizon Samsung Galaxy S4, there are over 35 pre-installed applications. Thankfully bloatware is pretty much banned from being pre-installed on a Nexus device.

Unlike other manufacturers who use custom skins like HTC’s Sense or Samsung’s TouchWiz, the Nexus 5 opts for the pure Android Experience. This means that there should be nothing new to learn as many of the skinned Android devices still rely on the baseline functions of Android.

If the person you are purchasing this for like to root their phone, Nexus devices are often the easiest devices to root (or unbrick if it fails).

When a new version of Android is released, the upgrades tend to hit Nexus devices almost immediately while phones for other manufacturers normally have to wait several months to get the upgrade (if at all). Nexus devices are normally supported by Google for 2-3 years so it should see at least 4-5 upgrades in its lifetime. With the exception of the Motorola X and Google Play Edition Phones, no other manufacturer has released Kit Kat for their devices.

Many of us Android users love Google’s smart personal assistant, Google Now. I personally rely on this application to manage my crazy schedule. Unlike other phones, the Nexus 5 has Google Now built into its core. By simply uttering “Ok Google Now” on the home screen will allow you to launch Google Now’s voice service. 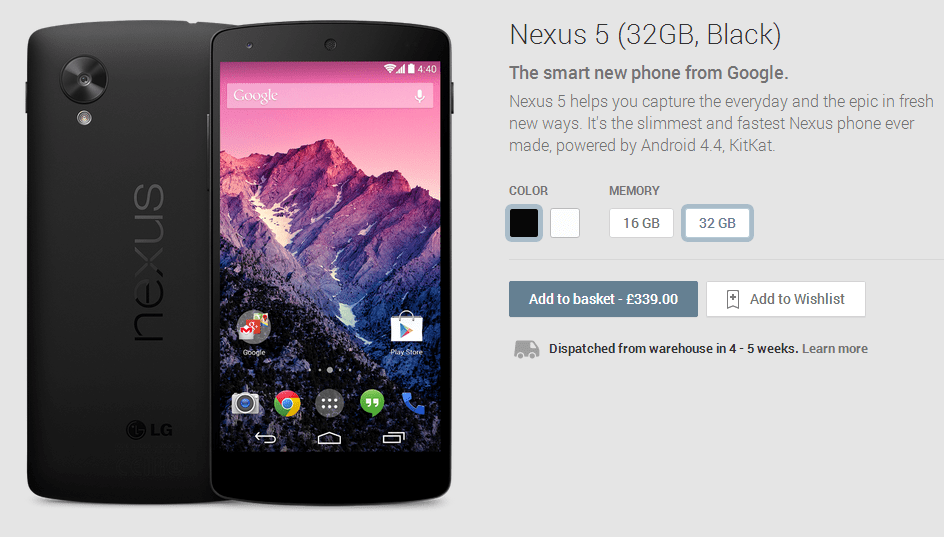 Aside from being one of the best phones on the market, Google is selling them at cost so you will not have to break the bank to stock up on a few of these phones. It is rare to find a phone (without a 4 year contract or financing fees) with a sub $400 price-tag.

So, feel free to skip the long lines this Friday and head on over to the Google Play Store to grab a few Nexus 5s.