If you sit down with any Google Glass explorer and ask them to propose a new feature for a future upgrade to Glass, many users would echo the desire to have augmented reality features in their headwear. In its simplest form, augmented reality would present a visual overlay of computerized data over your existing environment but a company known as iAT Technology may be looking to extend this by projecting a full Graphical User Interface (GUI) into a user’s vision.

The GUI would resemble that of a traditional tablet. iAT Technology would use a stereoscopic heads up display to both project the display and use a set of 3D cameras to track a user’s finger. Unfortunately the headpiece is rather large, you can think of it like strapping a Microsoft Kinect to a pair of Ski Goggles. Keep in mind that this is a prototype and is likely to shrink. 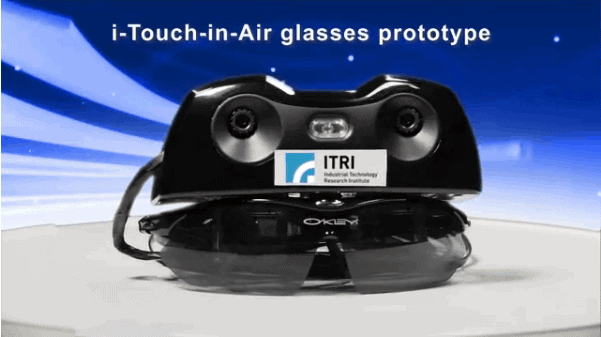 This sort of technology could be a game changer for other head mounted displays such as Google Glass. Using the voice controls is not always convenient, especially when in a crowded room. Fortunately Glass does have a side touchpad that can be used to accomplish most tasks.

I would be personally interested to see this sort of technology leveraged to add some additional functionality to Glass that does not normally lend itself well to the simplified control system.  Air Touch technology could enhance the web browsing experience on glass as well add the ability to edit and crop photos directly on the Glass unit. This would start a revolution in wearable technology that would make the technology more than a novelty.

Unlike the iAT Technology Heads Up Display, Google Glass opts for a sleeker design by using a single eye rather than a stereoscopic display. I personally would not have it any other way as Glass allows me to wear it while driving without it being a distraction, a feature that would not be possible if it obstructed both eyes.  Creating an augmented display with a single eye should still be quite possible.

Ok Google, can we please have this in XE11? Thanks.