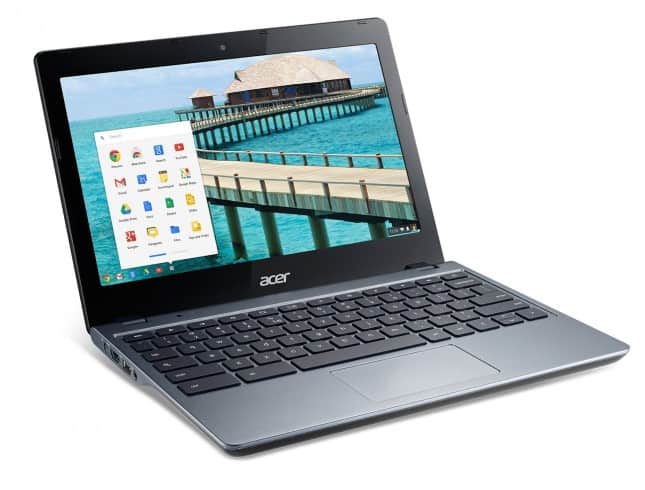 Chromebooks have become known as cheaper, more affordable laptops for people that just want to get online and that's just fine, they serve that purpose incredibly well. For how much you pay for a Chromebook, you do get a very good experience, so long as you're realistic enough to realize that the platform's strengths could also be its weaknesses, depending on how you look at things. Acer have been delivering Chromebooks since they first went public, alongside Samsung, and they've been solid, if not inexpensive and drab affairs. When Acer introduced the $249.99 Acer C720 to replace last year's model, complete with Haswell chip, for $249 it quickly became the cheapest Chromebook available.

Since then, the HP Chromebook 11 not only saw a price but but, was shortly pulled from shelves due to an issue with the device's charger. Now, Acer has an opportunity to hit that sweet price point of $199.99 and the C720-2848 is that Chromebook. For all intents and purposes, you're looking at the very same Chromebook, from the 11.6-inch 1366 x 768 display, the Haswell CPU and the 8.5 hour battery life. The key difference with the awkwardly named C720-2848 is its memory, cut in half to 2GB from the 4GB offered in the $249.99 model.

Depending on your outlook, losing 2GB of RAM might not be that bad a deal, especially considering that the Haswell CPU is both more powerful than the Exynos in the Chromebook 11, and just as long-lasting when it comes to battery life. The memory issue depends on how you use Chrome, expect it to hold as many tabs as your PC with 4 or 8GB of RAM and you're obviously not going to get that. If all you're looking for is a quick laptop to get things done online, and you're content with only a few tabs open at any time, then this is a pretty good deal. Coming soon to Amazon and Best Buy, the $199.99 price tag also gets you a free trial to Google Play Music All Access and 12 free GoGo in-flight WiFi sessions.