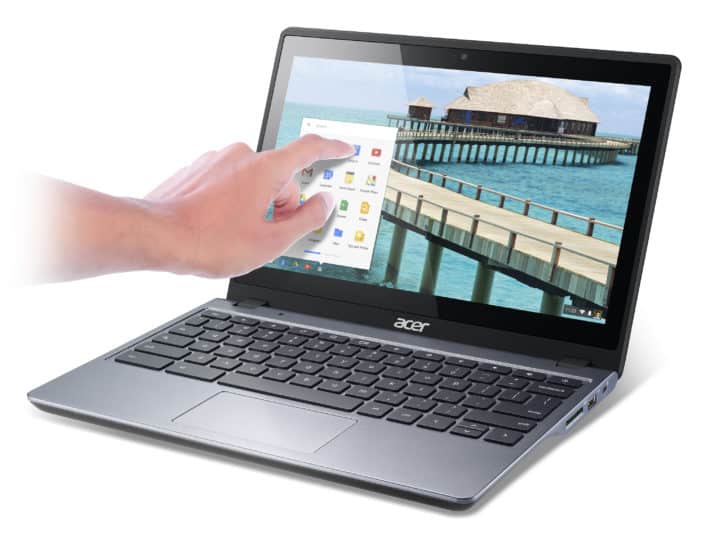 Lately, it seems like Acer has been going all in on the Chromebooks. They announced the C720 a little while ago (I promise the review will be up soon!) which has 4GB of RAM and Intel's Haswell chip for $249, as well as a 2GB model of the C720 for $199. Now we're looking at the C720P which is pretty much the same as the C720, but with a touch screen display. It still has an 11.6-inch 1366×768 resolution display, powered by Intel's Celeron 2955U processor which is a Haswell chip so expect plenty of battery life. Just as a tip, Acer promises 7-8 hours of battery on the C720, and I've been getting close to about 9-10 hours on the battery. The C720P is said to have 7.5 hours of battery life. It also has a 32GB SSD inside, which means you're going to be booting up the Chromebook in under 7 seconds.

As far as the weight goes, it weighs under 3 pounds. Which is pretty good for a laptop. Which makes it easy to carry around to meetings, to class, and more. The C720P also features a dual speaker design which delivers crisp and clear stereo audio during online chats as well as for movies and music. The Acer C720P, much like every other Chromebook, comes with 100GB of Google Drive storage for free for two years. It also comes with 12 free Gogo Inflight passes, which will allow customers to go ahead and enjoy internet while their travelling at no extra cost. This is a big deal for those that travel a lot. Especially as the holiday season approaches.

As far as pricing and availability goes, surprisingly we do have information on that. We're looking at an early December launch and the Acer C720P will be available "in several configurations" so we could see more or less SSD space. It'll be available in stores like Best Buy, Amazon and Acer's online store. It will start at $299.99.