Xiaomi announced the Mi3 early last month. The Mi3 is the company’s next flagship device. It features a 5-inch 1080p IPS LCD display and is powered by a Qualcomm Snapdragon 800 SoC. The phone is so popular that Xiaomi can’t keep it in stock. In fact, the first batch went on sale yesterday at 12pm and sold out in 86 seconds. 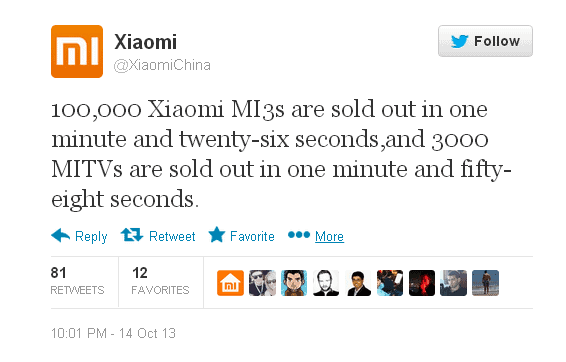 Xiaomi has been taking ground in the Chinese smartphone market. By offering smartphones with high-end specs at prices that rival the Nexus 4, Xiaomi has been able to make a dent in the marketshare of major smartphone manufacturers. In fact, they recently edged out HTC as the fifth most popular smartphone maker in the Chinese market. Their customers are loyal and their user feedback is consistently positive. Previous Xiaomi flagship devices sold out in similar time frames. Even low-end offerings like the Hongmi sold 100,000 units in about 90 seconds. Some of these sales end up in the hands of scalpers who are looking to re-sell the devices, but the company is creating a product that consumers are hungry for.

Xiaomi has stated that it intends to sell 20 million smartphones this year. They had previously set that goal at 15 million, but with the popularity of their devices and additions like Hugo Barra to its executive team, there is no reason to think that the company won’t hit that goal. They have also expressed interest in expanding into other wireless markets including the US. Xiaomi sold 7.03 million devices in the first half of 2013. They sold 7.19 million units in all of 2012. That’s some solid growth.

Xiaomi is branching out in to other areas, too. They released a smart 3D Smart TV at the same time as the Mi-3 and that sold out in record time too. The first batch of 3,000 TVs sold out in 1 minute and 58 seconds. The TVs are inexpensive, just like their smartphones. The TV is priced to move at only CNY 2,999 (about $490).