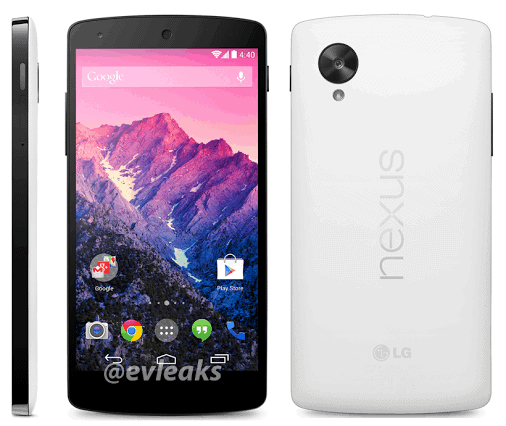 @Evleaks is back again today with another press render of the Nexus 5. This time it turns out to be in white, and looks pretty much like the other white renders and leaks we've seen recently. What's also interesting is that Evleaks said in his post "In white. 11/1." Which leads us to believe that the Nexus 5 will either be announced or launched on November 1st. Of course, Evleaks could be wrong. It's happened before, but very rarely. Similar to the Nexus 4 in white, it is the back that's white while the sides and front are still in black. Even the camera is still black, which looks pretty big.

Otherwise this press shot looks just like every other press shot we've seen in the past few weeks. You've got the transparent navigation bar, and status bar along with some new icons for the Phone, camera, and hangouts. As well as a new app drawer icon and folder icon. Along with the white/gray status bar icons that we've seen in many leaks.

This really doesn't tell us anything, except that there is a white Nexus 5, and hopefully it'll be available at the same time as the black one. Previously either the white Nexus devices were Google I/O exclusives for the attendees, or launched months later. The White Nexus 4 just launched a few months ago, while the Nexus 4 launched almost a year ago. Let's hope that changes, along with Nexus accessories being available. I'd love to see quite a few cases available from Google Play at launch.

So if November 1st is the launch day, we're looking at an announcement coming this week. With a Friday launch, they'd be taking a page out of Apple's book. Who always launches their phones on Friday and have a record selling weekend when they launch their iPhone or iPad. How many of you are anxious to purchase one?