It’s not long now until the flexible displays smartphones start showing up on the market. It seems both Samsung and LG are competing with each other to be the first to market with such a smartphone. Although, LG may be closer to a launch than Samsung, USPTO, the patent and trademarks office, has granted Samsung the name Galaxy Round for a potential flexible display smartphone. 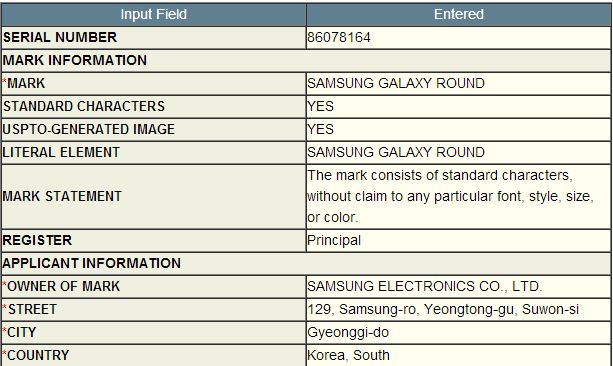 Samsung unveiled its YOUM flexible display at CES this year, and of course it impressed everyone with it, because the display was bending and twisting , yet still working as expected. The YOUM display is based on graphene and plastic which makes it so flexible and yet so resilient.

Earlier rumors said that these displays could be “unbreakable”, which makes a lot of sense, because unlike displays made out of glass, these flexible OLED displays shouldn’t shatter when you drop the phone. That’s actually the type of benefit that both Samsung and LG should be promoting to regular consumers, because everyone can appreciate a phone that doesn’t break the moment you drop it once. Build materials of smartphones have become better in recent years, but when touchscreen moved to glass, they actually took a step backwards in this regard, because now the touchscreen is by far the weakest link in a phone, in terms of which component breaks the fastest.

So both Samsung and LG could really run with this. My fear, though, is that they will instead promote gimmicky features such as banana-shaped smartphones, just to convey how “flexible” those displays are. I think that would be a mistake, because I don’t see many people buying such phones. Samsung may not make such extreme phones, though, and just like they showed at CES, they may only bend the sides a little, to give them a bit of a cool edge.

I have doubts that it would be useful or functional in any way, but I could see how it would look cool to people, and “different”, so I wouldn’t mind that as much. But in the end, how resistant the screen will be to drops will really be its biggest benefits. I for one can’t wait to see all the drop tests.