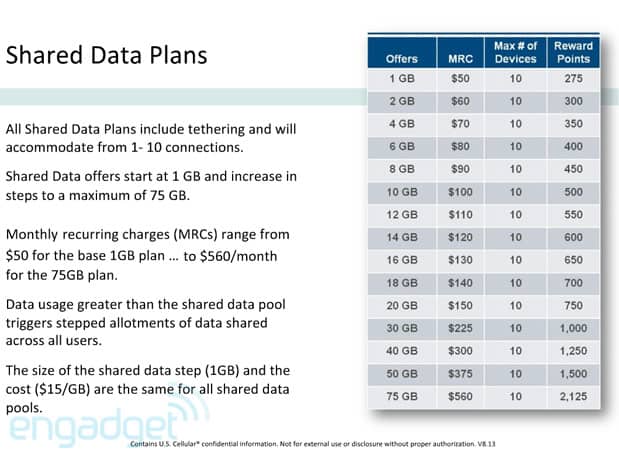 Verizon and AT&T were the first carriers to get rid of unlimited data for new customers and thus introduced shared data plans. While Verizon is forcing it upon their customers, AT&T is offering it as an only choice starting on October 25th for new customers. Now regional carrier US Cellular is jumping on the shared data bandwagon as well. So basically the plans will be starting at $50 for 1GB and range up to $560 for 75GB of data. Now you can have up to 10 devices on this shared data plan, and all of your devices will be sharing the data.

Verizon and AT&T have been telling us for quite a while that these shared data plans are better for their customers. I'm still not sure I believe them. I think that unlimited data plans were still better for customers, but not as good for carriers since so many of us would use a ton of data (and still do) especially since you can tether your phone. Carriers have found out that data is their new cash cow, instead of text messages and voice minutes.

There's plenty more details over on US Cellular's website, for those interested. It seems like a relatively good deal compared to the other carriers like Verizon and AT&T, but remember US Cellular isn't available everywhere, unfortunately.

How many of you are using US Cellular? Are you interested in these shared Data plans?