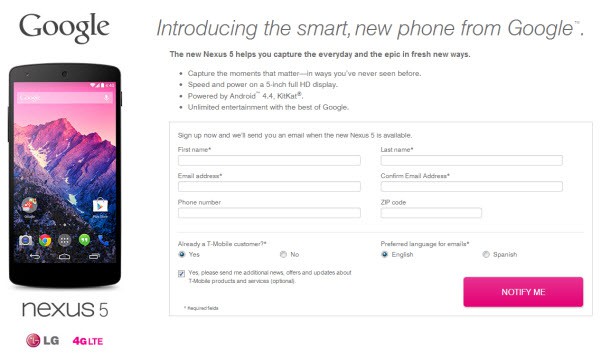 T-Mobile has just announced that the new Nexus 5 will be available for the Holiday season and has a "signup page" where they will send an email notification to let you know exactly when the phone is available to purchase. As usual, the pricing and exact availability are unknown at this time, but with their announcement and the aggressive natural of T-Mobile, you can be sure it will be sooner rather than later. T-Mobile has the headlines:

The new Nexus 5 helps you capture the everyday and the epic in fresh new ways:

As expected the newest Google phone, the Nexus 5, was built by LG, based largely on their popular LG G2 flagship smartphone and features a stunning 5-inch Full HD 1080p display, the speed of a Qualcomm Snapdragon 800 Quad-Core Processor pumping out 2.26GHz, with 2GB of RAM, and an 8MP Camera with Optical Image Stabilization (OIS) to assist you in taking pictures, especially in lower light.

The Nexus 5 will also come with Android's newest OS, 4.4 KitKat, and the exciting thing about the Nexus line of phones is that it uses a pure Android interface – no skin overlay like Samsung's TouchWiz, LG's UX, HTC's Sense, or Motorola's Blur, so you can experience Android as Google intended it to be.  This line of phones also receives any software/OS updates before all others, so you can rest assured that you will always have the newest Android before anybody else.  For a while, the Nexus 5 will be the ONLY smartphone out there with the Android 4.4 KitKat, until it finally trickles down to the other devices.

You will be able to purchase the Nexus 5 on T-Mobile at a very affordable price using their Simple Choice Plan or, if eligible, their JUMP! Program at participating stores.  The availability and pricing should be announced soon, so please register on their site to receive updated information.  Let us know in the comments or on Google+ if you will be picking up your Nexus 5 at T-Mobile as soon as they make their announcement.